If Heckler & Koch made a semi-auto MP7, would you be interested?

So, would you? If Heckler & Koch made a commercial variant of the MP7 personal defense weapon (PDW) that is to say, a semi-automatic version that could be sold to the general public, chambered in HK 4.6x30mm, would you be interested in one?

We started asking ourselves this question following the Great RECOIL Debate of 2012. In short, the MP7 and the cartridge it fires, HK 4.6x30mm, are not available on the open market. While we see no reason why sale of these guns should be prohibited—even though U.S. law does prohibit the sale of select-fire machine guns manufactured after 1986, which this is—it is debatable if a semi-automatic MP7 would ever see much success given all the other options out there.

That’s HK’s position. Not that this gun is “too dangerous” for civilians, but rather, when you dig deep, there just isn’t a market for it.

From a practical standpoint, the MP7 and its ammo was designed to do one thing well, and that’s punch .18-caliber holes through armor (and anything behind it). Like the similar FN 5.7x28mm cartridge and the guns that fire it, the MP7 has a narrow application. Besides just shooting it for fun, that is. The MP7 is in fact very good at defeating armor, as it’s effective on targets protected by CRISAT armor, 20 layers of Kevlar and a 1.6mm titanium plate, out to 200 meters. But as far as effectiveness as an all-around self-defense cartridge, that’s still up in the air. 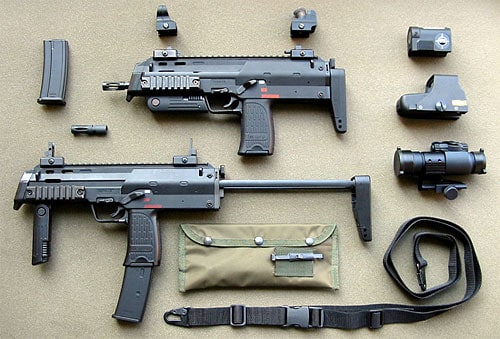 There are logistical issues bringing the MP7 to market. First is that it would have to be re-designed with a semi-automatic action and a 16-inch barrel. The current MP7 uses a 7-inch barrel. If HK wanted to make a pistol version of it for the U.S., that too would mean a redesign of more than just the fire control group. The integrated stock and forward pistol grip would both have to go.

The ammunition, most of it, would be illegal to import or sell, including the brass hollowpoint loads. HK and the other 4.6x30mm manufacturers would have to develop entirely new bullets to load for the commercial market. Somebody’s going to make the ammo, but customers are definitely going to have to open up their wallets pretty wide if they’re going to want to buy it.

Then there’s just no getting around one last bit, and that’s energy. Most 4.6x30mm cartridges don’t pack a lot of punch. Don’t get us wrong, no one here is volunteering to get shot. Loads vary, but a hot 4.6x30mm cartridge is going to make about 400 foot-pounds of energy, which is equivalent to 9mm, but with the limitations of a 26-42 grain, .18-caliber bullet. Current bullet designs even depend on body armor to de-stabilize the projectile, otherwise it passes straight through.

There’s very little that the 4.6x30mm cartridge does that just about any rifle cartridge doesn’t do better—on paper. But in truth, the MP7 is a very compact, lightweight submachine gun with terrific handling.

One of the most impressive things about the gun/cartridge combination is recoil. It’s an extremely soft-shooting combo, no one could ever complain about it on that front. Even not talking about full-auto, a semi-automatic MP7 would make a great plinker. With the right ammunition, it would no doubt be a popular home-defense option and small game getter. A flat-shooting 9mm-equivalent with no muzzle flip that won’t overpenetrate? Where do we sign up?

Depending on the configuration, the MP7 weighs as little as 2.65 pounds unloaded, which most definitely qualifies as a fun short-barreled rifle to make noise with.

HK has said that they don’t believe they can successfully market a consumer-ready MP7. There is a ring of truth to that. If they did, they would have to overcome some serious hurdles, especially on the ammo manufacturing side. Military and law enforcement pricing for an MP7 is about $1,100, so we doubt that a semi-automatic version would be an inexpensive alternative to the FNH PS90.

Assuming that the gun, some ammo and some spare magazines would set you back, say, $2,000, would you want a semi-automatic MP7?