What’s old is new again as the EBR is based on the 7.62 NATO M14 battle rifle and is set up as a Designated Marksman’s Rifle and issued to soldiers who need the more potent cartridge and increased range over what the 5.56 NATO M4 carbine provides.

“Today we are practicing and familiarizing ourselves with our new M14 7.62mm weapon before we go to the range in preparation for our fall deployment to Afghanistan,” said Spc. Daniel Lueptow. “Though I understand the need for adjustment for this upcoming deployment, I enjoyed the older model and did well with it on my last deployment.”

Since 2004 branches of the U.S. military has been re-issuing the M14 in EBR form, starting with the Navy SEALs and the Coast Guard. The Army has really embraced the EBR and has made two available for every infantry squad deployed to Afghanistan—it’s not just for select units.

For a time the Army re-issued standard M14 rifles but their fixed wooden stocks and lacking optics options made them a poor fit for modern soldiers. The Mark 14 is based on a standard M14 that has been outfitted with a shortened, heavy barrel with a new flash hider that has been bolted to a completely different chassis, complete with a quad rail, pistol grip and telescoping buttstock. These rifles are also issued with scopes for long-range shooting. 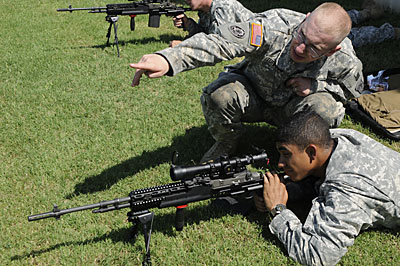 These PSD troops are training on the Army-specific variant of the Mark 14 EBR, the M14EBR-RI. The Army’s EBR features a standard-weight and -length barrel, but otherwise maintains all of the other EBR improvements, including the chassis.

“I am learning the basic know-how of the M14s on site picture, the trigger squeeze and just the fundamentals on the weapons system in preparation for deployment,” said Pvt. Dylan McGalliard. “Growing up the way I did, we had a lot of hunting rifles that were the same caliber as this one, but on the military side this is my first time with a fancy one like this.”

Many people are happy to see that the Army and other branches of the U.S. military are bringing back the big .30 caliber long-stroke gas piston-operated rifles, with about the only criticism against them being that they’re not lightweight rifles. The M14EBR-RI weighs about 11.5 pounds unloaded and measures in at 40 inches long. That being said, they’re also soft-shooting and effective well beyond 800 meters with glass.

The Army is also testing new ammunition for the M4 carbine, improving its range to about 600 meters. Combined with these DMRs, our infantry are more effective at greater ranges than ever before.