After several months of delays and rumors that the project could be cancelled, Advanced Armament Corp. and Harrington & Richardson are now shipping the AAC Handi-Rifle to distributors. Expect to see them in stores soon.

Announced at this year’s SHOT Show, the AAC Handi-Rifle chambered in 300 AAC Blackout drew a lot of attention. While many, many companies were announcing new firearms chambered in 300 BLK, the vast majority of them were premium AR-pattern rifles. The Handi-Rifle couldn’t be any more different.

Like all Handi-Rifles, this new model is the pinnacle of simplicity. It is a single-shot, break-action rifle. It has no sights, just a Picatinny rail for optics, it has an inexpensive polymer stock and a light and compact 16-inch barrel. All the steel has a no-frills phosphate finish. About the only AAC-inspired feature, besides the cartridge it fires, is that the barrel is threaded for muzzle devices, naturally, silencers. 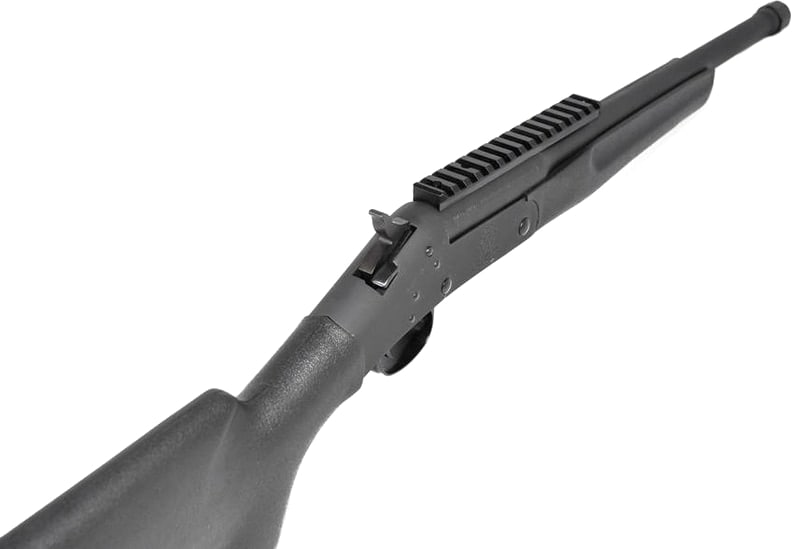 And unlike the bulk of 300 BLK guns, the AAC Handi-Rifle, owing to it’s elementary design, has an MSRP of just $360. We expect listed prices for this gun to be under $300. If you’re looking to get a gun that suppresses well but are one a limited budget, this could be your ticket.

As for what this gun is good for… While a lot of people are asking themselves, “Why,” we’re pretty sure AAC and H&R were thinking, “Why not?” How can this not just be pure joy to shoot?

It should excel at running suppressed. With a manual action there’s no parts noise and all the propellant gas goes out the muzzle. And full-house 300 BLK is no slouch. Ballistically-similar to 7.62x39mm, the rifle will have no problems taking small and medium game. Hunting with a silencer—assuming it is legal where you live—improves your chances by scaring away less game.

Another plus for hunting and plinking, Handi-Rifles are extremely accurate guns for the money. They make great hiking guns, truck guns, youth guns, plinkers and general-purpose guns. Provided you don’t mind a bit of a delay between shots.

Finally, while it makes a fine option for someone who wants to shoot 300 BLK without spending a whole lot, it gives people who already have some 300 BLK around the house another way to enjoy it without breaking the bank. The full specs are:

What’s your opinion on the AAC Handi-Rifle? Is is a dumb toy, a must-have, or both?