You should have a go bag.

Yeah, we know that we’re probably preaching to the choir here. A lot of gun fans, especially the preppers out there, already have bug out bags handy. The tricky thing is convincing everybody else that it’s in their best interest to get one of their own.

We’re not trying to say that the world’s going to end or anything, but keeping a general go-bag handy falls into those “better to have it and not need it than need it and not have it” category. This rule is particularly true for people who live in areas that are prone to natural disasters. Earthquake in California? Flooding in Louisiana? Wildfires in Midwest? Grab your go bag and skedaddle.

But where to start? This video from Guns and Gear season 4 shows off the goodies in the pre-made go bag from ammotogo.com. You can go with one of these preset bags, but it’d probably be cheaper and more effective to customize one of your own. After all, no two people are identical, so why should you rely on somebody else’s go bag in a life-or-death scenario?

In any event, it provides good starting point. This go bag includes the following: 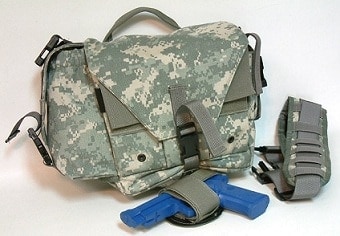 That’s not a bad start, but we can quickly rattle off a few things that you might want to include in a go bag of your own:

The one thing to keep in mind when you’re making a go bag is that every item adds weight. Include important items in your bag, but after lugging around a heavy backpack for a few hours you may find yourself questioning whether or not your prized collector’s edition DVD box set of “Battlestar Galactica” really deserves a spot in your go bag. In fact, it might be a good idea to try on your go bag and do a bit of hiking to get a feel for its weight. That should help you figure out if it’s too heavy or if it’s light enough that you can add some more stuff.

Another good idea is to give your go bag a test run — you know what they say about the best-laid plans of mice and men. Bring your bag with you the next time you go camping and you might have one of those, “Man, I wish I’d brought X with me” moments as you dig around in the bottom of your go bag. Figure out what you absolutely need to have, throw it in a pack, and keep the bag handy.

And here’s one final tip. Unlike the go bag in the video, make sure everything is unpackaged, has fresh batteries, and is good to go. The last thing you want to do in a natural disaster setting is grapple with that impossible plastic packing. That stuff is hard to get open with a pair of scissors in the comfort of your own home. Imagine trying to open up the packaging on a Maglite while you’re fleeing from flood waters, fumes from a nearby chemical spill, or a zombie horde.