Having your guns engraved

There are very few ways to improve the aesthetics of a well made gun.  Take the classic Colt 1903 for example.  The large frame and slide make a great canvas.

This is the classic way to customize a gun.  Scroll work or floral designs.  Monograms or animals.  But it is a big step  Engraving a firearm is both expensive and permanent. 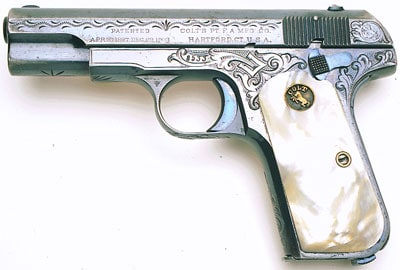 How far back does engraving go?  Anthropologists have postulated that engraving is one of the earliest forms of artistic expression.  Simple lines in scratched in stone.

The techniques of firearms engraving have their origins in woodcarving, scrimshaw and ornate metal work.  Some have speculated that guns were engraved to increase the surface area on the metal.  The rough grooves and angled cuts would hold oil and help prevent rust.

I think it has more to do with ornamentation.  Engraving is a practiced craft.  It requires skill.  It is labor intensive and requires specialized tools.

There are many different ways to go about engraving guns these days.  The most expensive entails hours of hands on work by a master craftsman.  Most of these artists still use tools very similar to the ones used for centuries.

There is even a guild, of sorts.  The Firearms Engravers Guild of America (FEGA) offers some certification for engravers.  According to their literature, “the FEGA Master Engraver certification is for those hand engravers that wish to be acknowledged amongst their peers for excellence in engraving.”

While it is helpful to be acknowledged among your peers, customers find such certification useful too.  While it is no guarantee, I would much rather trust my investment to an FEGA Master Engraver than I would anyone else.  This is, after all, expensive.

While most engraving is done by hand (actually carving away and scoring the metal), there are many other options.  Some engraving is done (or begun) by machines.  Some use stamps.  Others still are using lasers.

This is the basic equation.  The more hands on labor an engraving requires, the more expensive it will be.  The same goes for the reputation of the engraver.  And because the process takes so much time, it is not uncommon to wait a year or more for an engraving to be complete. 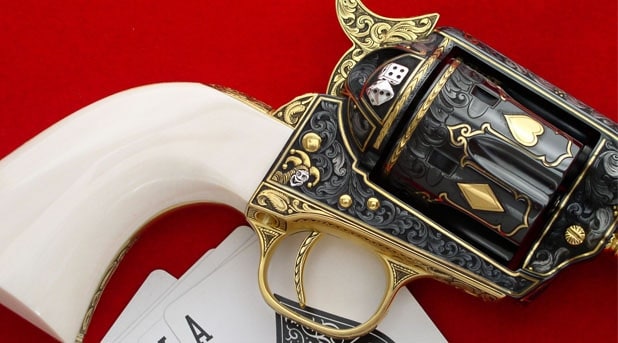 I like Mike Dubber’s work.  He’s an FEGA Master Engraver and also teaches the craft.

The other logical option is to place your trust in a company you already trust.  One of the best shops for refinishing firearms also does some engraving.  Turnbull Manufacturing does some amazing work.  They are known for their abilities with heat treating and bluing, but Turnbull does a little bit of everything (and all of it looks amazing).

The 1911 slide at the top of this page was done by Tom McArdle at Turnbull.  I love the deep relief cuts on this slide–they remind me of old hand tooled leather.

If you’d like to go bigger, there are more corporate options.  Smith & Wesson is one of the industry leaders in engraving.  Their engravers do two basic types of work.  They customize Smith & Wessons before they are sold, and they customize guns that people bring back to them.

The advantage of working with Turnbull or S&W has more to do with practicality.  These shops back their work.  Also, because of their more organized structures, their pricing can be easier to estimate.  This isn’t always an issue with the individual artists, but it can be.

And many people pick up great guns with serious finish issues and make them beautiful again by having them engraved.  If that were my goal, I’d go to Turnbull.  They can do the restoration, the engraving, and then refinish it flawlessly.

Engraving is expensive, but the prices vary.  There is no way to even begin estimating how much it might cost.  The investment can be worth it though, if the engraving is tasteful and not too highly customized.  An engraved gun can become a work of art, valued far more for the engraving than the gun beneath it.

But beware of the novices.  Check out examples of their work, always.  But also look at other artists’ work.  Get a sense of what’s possible.  And read through this glossary.  Roger Bleile, an expert on the art, has done great work to standardize the vocabulary of engraving.  Armed with this lexicon, customers can speak the engraver’s language and say clearly, exactly, what they want.

In the end, I offer this simple caution.  Engraving is like a Tattoo.  It doesn’t come off easily.  I heard someone compare engraving on a revolver to putting “lipstick on a pretty girl.” 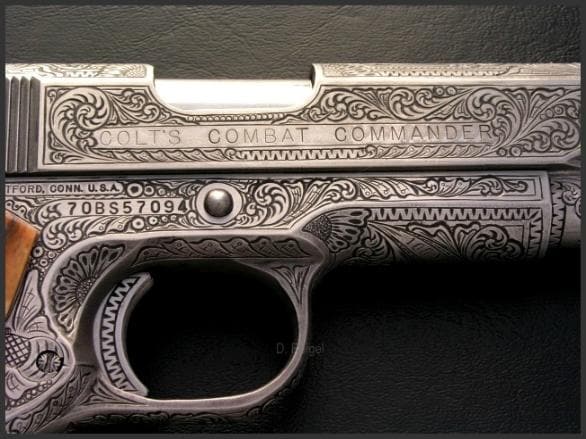 Like lipstick?  No.  Like tattooing on lipstick that you’ll never be able to take off.  If the piece you want to have engraved is irreplaceable, don’t do it.  If you pick up a beater 1911 with finish issues, and have a couple of grand that you don’t know what to do with, by all means.  Dress that thing up.