Guns and drugs don’t mix. We can expand that general rule of thumb to apply to a few other situations. For example, it’s also true that gun owners and drug abusers don’t mix.

But this would-be drug thief chose the wrong pharmacist. John Agyemang, the man working behind the counter, just so happens to be a gun owner and a Major now serving in the Army reserves, so when Agyemang spotted the butt of a gun in the crook’s fanny pack, he went into action. Agyemang retreated to the back of the store, grabbed his firearm and opened fire on the armed robber.

Agyemang fired five shots at the thief. Overdosing on heavy lead wasn’t on the burglar’s agenda that day, so he wisely fled on a mountain bike. According to Jason Laughlin, the spokesman for the Camden County prosecutor’s office, it did not appear that any of the bullets struck the thief.

Agyemang has remained rather humble since the ordeal. He said, “I’m no hero, but I thought, ‘Either him or I.’” He also looked back on the shooting and fretted over the fact that he could have injured a bystander. “You don’t know who’s out there, it could be a child,” he added.

Despite the risks, it was probably wise of Agyemang to assume the worst. In 2011, a gunman killed a pharmacist in New Jersey and stole $10,000 in pills. A similar incident occurred two months later in neighboring New York, but that time a pharmacist, a teenage clerk, and two customers were brought down by a pill thief. Agyemang told KYW-TV in Philadelphia, “He could have shot me dead and nobody would have known because it’s not a busy area.” 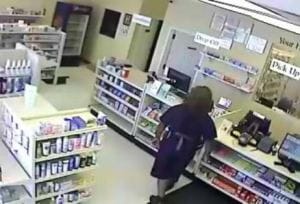 Authorities are still trying to locate the man. He was apparently crossdressing with a blue dress, a long wig and black sneakers. That might have been his first mistake. If you’re going to dress like a woman, at least try to do a good job of it. Everybody knows that you can’t wear a dress with a fanny pack.

The good news is that the cops won’t have to waste any time dealing with Agyemang. The store owner has not been charged and the police found that he legally owns his firearm. It’s a shame to think that Agyemang has only kept his store open for three months before his first encounter with an armed robber. Hopefully, he won’t have to deal with another pill-popping thief ever again.