A new machine gun range has opened up in West Ashley, South Carolina, Quickshot, owned by entrepreneur Alex Perkins, is open to all shooters—12 and up with a guardian—but specializes in renting machine guns to customers. It is the second of two Quickshots, following the model set forth by his brother, Tyler, in Atlanta.

The new facility pulls out all the stops, building the facility from scratch, using the most up-to-date sound- and bullet-proofing techniques and air circulation and filtration systems.

Quickshot is nice and new, but it’s also one of a growing number of gun ranges that have started offering their patrons the chance for some range time with guns that have their fun buttons intact.

“You can’t go just anywhere and shoot a machine gun,” Perkins said. “We saw the need, and we like to shoot.” 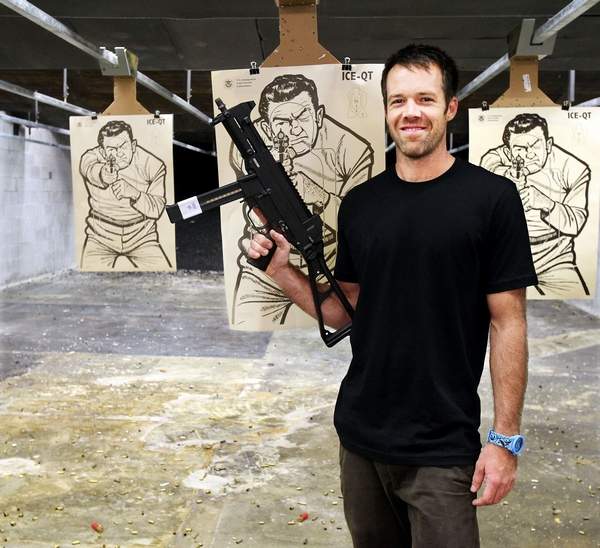 The brothers combined their backgrounds in shooting, business and construction to make the machine gun ranges. And they’re carrying some really modern hardware, to boot. Here’s Perkins and his UMP40, one of many Heckler & Koch firearms that are not made available to the public.

Their prices aren’t bad, $13 gets a lane, no time limit on weekdays and rentals are $10 for semi-automatic guns and $30 for machine gun, and of course you have to use their ammo with their guns.
Like many gun ranges, they will be offering other shooting services, including classes. “Hopefully, within the next week we’ll be doing concealed carry classes,” Perkins said.

With an abundance of guns available to customers as young as 12 (with a guardian), Perkins said the business always has a range master in the shooting area, which is the only area where guns can be loaded. The staffers carry sidearms, and they can view the area from the front of the store through bulletproof glass.

We really like places that offer NFA-regulated firearms. They simultaneously let people get their hands dirty with some of the coolest firearms being made while showing everyone that these guns aren’t special or scary. The more people that get to shoot machine guns, the better. Combined with large-scale machine gun shoots and silencer shoots, we hope that some things about who is allowed to own these things and who isn’t changes.

That being said, this is just one machine gun range of many. Where do you go to shoot machine guns when you’re not in South Carolina? Let us, and other enthusiasts, hear all about it in the comments.