The TRW Low-Maintenance Rifle: A cheap response to the AK-47

In the 1970s the US Army and Special Forces Groups sent tactical advisors into a number of third world countries in an effort to train local militias and stop the march of Communism around the globe.  Facing an enemy largely equipped with cheap and plentiful Soviet AK-47s, the only choice at the time for the US to arm these locals was either the then-cranky M16, or the older and much heavier M14 and M1 rifles. This led to a call for the design of a simple and light rifle that could be literally given away and so began the saga of the LMR.

In 1971, the Department of the Army issued a statement of work tender for a light, maintenance-free, rifle. This project was promptly dubbed the LMR for Low-Maintenance-Rifle. This weapon was to be in the standard 5.56x45mm NATO chambering, and be as simple as possible. The idea was that instead of giving away complex and high- maintenance M16 and M14 rifles as military aide to small countries and local indigenous groups that were friendly to Uncle Sam, the new LMR could be sent instead.

With this goal in mind, the buzzwords were cheap and reliable, with a budget sweet spot of about $130 per unit when placed into full production. Aerospace company Thompson Ramo Wooldridge (TRW) Systems Group, which at the same time was building a fleet of hush hush reconnaissance satellites for the Air Force, took up the contract and started development of weapon. They had also been a player in the M14 National Match contract and had designed such exotic weapons as the HIVAP and a .50-caliber flechette rifle.

The LMR was engineered under the supervision of Donald A. Stoehr from the ground up as the West’s answer to the AK-47 series of rifles: a simple and effective rifle that could be made on the cheap and given to uneducated third world proxies to use with only the most basic of training. To facilitate this the LMR has was designed with a thickly chrome-lined barrel to help with fouling and corrosion and all internal parts were finished with a thick coat of dry space-age lubricant, just in case it never had a good cleaning. The manual described this as being ‘semi-permanently lubricated.’ 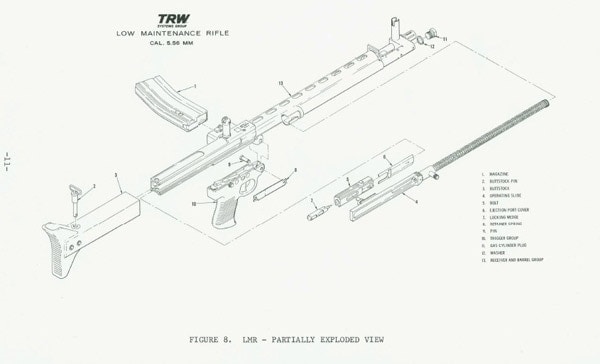 If the wholesome freedom-loving rebels ever did clean the weapon, it was designed to easily and quickly disassemble into six major groups, namely: magazine, buttstock, operating slide group, trigger group, gas cylinder plug and barrel-receiver group. The manual states that the weapon could be cleaned out with “Fresh water and a toothbrush or lint-free rag.”

To keep weapon commonality to a maximum with the standard M16s of the day, the LMR was engineered to take 10, 20 and 30-round AR mags as well as the M16 series bayonet. The basic trigger unit as well as the plastic pistol grip was that of the M60-series machine gun.

It fired from an open bolt, but the breech had a cover that would snap open and closed to keep debris from falling in, much like 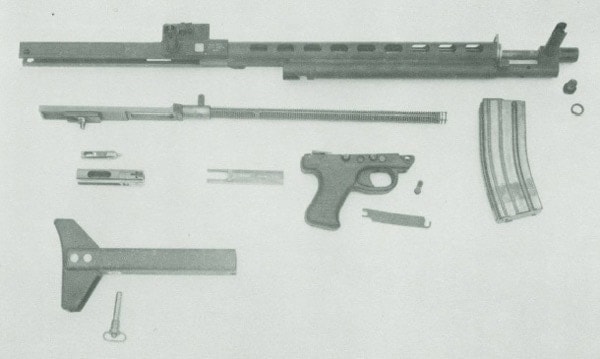 the old but reliable M3 Grease Gun of the generation before. Predating the piston-stroke designs growing in popularity with today’s AR platforms, the LMR had a long stroke piston located on the firer’s right hand side of the 19.4-inch barrel.

Overall weight (without magazine) was 7.26-pounds and (loaded) right at 8-pounds. With the bayonet mounted, the overall length of the rifle was 40-inches. The sights included an adjustable front sight and a rear-dual range peep sight that had flip-ups for 0-300 meters and 300-500 meters. The sight radius was 21-inches.

One interesting aspect of the LMR rifle was that it was fully automatic-only, with no provision for semi-auto fire. As long as the ammunition supply held out, it had a theoretical cyclic rate of about 450 rounds per minute. With this, it could empty a 30-round magazine in about 4 seconds flat. This rate was about the same as the legacy M1928 Thompson and M3 submachine guns and was seen as being relatively controllable.

The TRW-designed weapon was very different in that the magazine well was not on the bottom like the M16 and AK47 or even on the top of the weapon, such as on the Bren light machine gun. It was instead on the left hand side and the magazine was horizontal to the ground. Several guns in history have used a side-mounted magazine including the Johnson M1941 Light Machine Gun, the German MG35 and MG13 machine guns, the Swiss M1925 Rifle, and of course, the Sterling sbumachinegun. Although the gun bears a very strong resemblance to the German Fallschirmjägergewehr FG42 rifle, the internal workings are different

Why wasn’t it adopted? 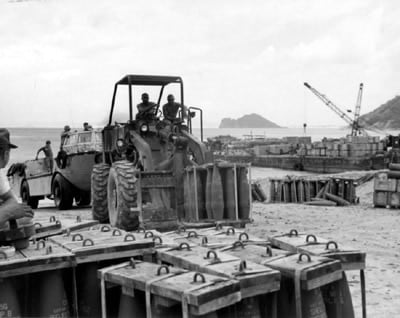 While between two and 10 LMR prototypes were produced (accounts vary), by April 1973 the climate of the United States Army had changed. When the tender was first awarded in 1971, the country still had more than 156,000 troops in South Vietnam. By 1973, this had been reduced to just 50 advisors and a few marines guarding the embassy in Saigon. With the reduction in force numbers, this also left a number of surplus M16 rifles available in US arsenals. In the first six months of 1973, more than 161, 398 already paid for and gently used M16s were given away to the governments of South Vietnam, Laos, Indonesia, Cambodia, Thailand, and Jordan as military assistance grants.

In short, there was very little market for new guns when surplus was available. A gun already paid for is always cheaper than a gun that hasn’t been, no matter how good, or cheap, it is.