Man Opens Fire in Gun Store, Gets Gunned Down

We sat down to try to think of the absolute worst locations imaginable to pull out a gun and try to shoot somebody.

Well, evidently common sense isn’t quite as common as we thought. A man was shot and killed at a gun store in Indianapolis, Indiana, after he opened fire on a gun store clerk.

According to reports, 26-year-old Brian C. Wayner rented a gun from Don’s Gun and used it at the attached shooting range, burning through three boxes of ammo. Then, Wayner went to the restroom to wash his hands before heading to the counter to ring up the total. Bizarrely, without giving any warning or saying anything, Wayner pulled out the gun that he had rented and opened fire on Ben Chance, the clerk behind the cash register.

Chance did pretty much exactly what you would expect a gun store employee to do: he fired back. Chance proved to be the better shot, though, because the wounds he inflicted ultimately proved fatal for Wayner. Chance was later rushed to a hospital where he was placed in critical condition, but he survived treatment and is currently recovering.

Police and Don Davis, the man who owns the gun store, are trying to piece together how and why this happened. It’s clear that Wayner somehow managed to evade protocol, because it’s against store policy for customers to carry loaded guns inside the store unless they’re at the indoor range. Davis and his employees will need to tighten security, but he’s left scratching his head over Wayner’s motive. “Nothing was said (from the shooter),” Davis said, “Not one word.”

The shooting has had some mixed reactions in the community. Mike Hilton of Pop Guns, a rival gun store that has also had its own run in with criminals, said, “I have empathy for (Chance); he’s going to remember that for the rest of his life.” 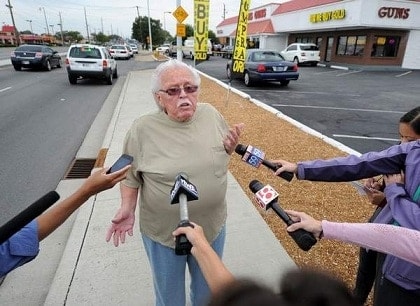 Clarissa Toa, the owner of AAA African Braiding nearby, mentioned that Don’s Guns adds security to the region. “Nothing ever happens in this neighborhood except Don’s Guns,” she said. “We’ve been here for 10 years and don’t worry.”

The owner of the Gold Spot next to Don’s Guns, however, fears that the recent shooting is going to scare off customers.

It’s a relief that this story has a mostly-happy ending. It’s a shame that Wayner had to die (in part because everybody wants to ask him, “What on Earth were you thinking?”), but this is a situation where the criminal absolutely left the store clerk no choice.

So, what can we take from this story? It’s probably safe to say that we have a new candidate for the Darwin Awards. And in the words of Adam, a self-proclaimed gun store owner who commented on the story, “Kudos to Ben Chance! Don, you need to give this guy a hefty bonus. He deserves it.”

We second that. If getting shot and taking down an attempted murderer doesn’t qualify for hazard pay, then what does?