The IO Cover is a Kickstarter project to make a different kind of lens cover for Aimpoint Micro reflex sights. Designed by Joseph Chen to be used with just one hand, the IO Cover is an interesting concept that’s looking for backers. Intended to replace the included “bikini”-style lens caps, the IO Cover also wraps around most of the optic’s body adding another layer of protection to the whole unit.

From the Kickstarter page: “Some people don’t get to pack it up and go home when the weather turns bad. Keep your lenses clear of rain, sand or mud; so you can use your micro optic in less than perfect conditions.”

This cover and lens cap system addresses one of the downsides to having such a small sight, and that’s that there’s no space to attach most styles of flip-up lens caps. 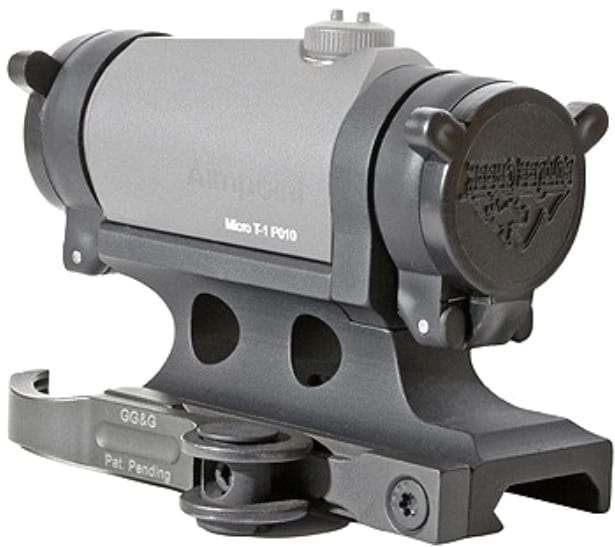 Existing solutions like GG&G’s Aimpoint Micro mount add lens caps, but at $200, they also add bulk and negate the size advantage inherent to the Micro designs.

It’s also clever, in that the arms that attach the cap to the body are long enough to snap the caps together by the sight’s side, which is where the name comes from. When shooting through an IO Cover open with the caps stowed, it looks like the letters I and O.

And the IO Cover is expected to retail for just $30, so you don’t have to worry about potentially tearing one, even though they will be made out of tough and stretchy urethane. Anyone who pledges $25 or more gets one off the front of the line, in any color they wind up making these in. They need to raise $20,000 and in just a couple of days have already managed to get almost $4,000 already.

Other bids get you more covers at lower prices. A $70 pledge gets you three covers and the chance to help Chen finalize which colors the final IO Covers will be made in. $100 gets you five covers, a color vote and you get to help pick the logo. $250 will guarantee you 10 covers, a color vote, a logo vote and one prototype.

The project is in its third year of development and fifth revision. Prototype owners can offer any feedback on their unit to help Chen and his team finalize the design, and if it gets the all-clear and the funding a month from now, they will begin tooling and production immediately. It takes about five weeks to make the tooling and the first production run is expected to take five weeks as well, meaning IO Covers are expected to ship in time for the holidays.

Given the speed at which the IO Cover project is getting backers, we fully expect this to become a reality. If you’d like to know more or contribute, Chen is also expecting $1 “Bump Level” pledges. Read all about it on the Kickstarter page.