Going through the steps to acquire a concealed carry permit can really be a pain. We’re not saying that the steps are superfluous, necessarily (that’s a whole different debate), we’re just saying that they’re freakin’ inconvenient.

Well, concealed carriers have found a way to cut through some of the red tape for speedier, easier concealed carry permits. Virginia recently added new legislation that requires the state to accept online courses as proof of competency. Virginians probably thought that online courses would make their lives easier, but it was more difficult to predict that out-of-staters would take advantage of the system, too. 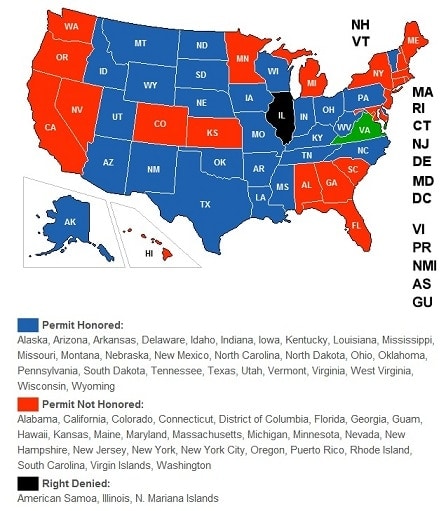 Some states require a concealed carry applicant to handle a firearm as part of the training course, whereas Virginia has no such requirement. Out-of-staters can take Virginia’s online course, pay the fees, and then get a concealed carry permit in any of the 26 states that have a reciprocity agreement with Virginia.

Here’s what applicants have to do:

Unfortunately, we can’t be certain of how many out-of-staters are taking advantage of this loophole because the police do not track whether people receive training certification online or offline. Virginia issued 1,321 concealed carry permits to nonresidents last year, but the state has issued 1,632 permits to nonresidents in the first half of this year. Online courses are probably responsible for this substantial uptick.

Predictably, gun control advocates aren’t terribly thrilled about the news. Lori Haas, a gun control advocate, said, “Your blind grandmother could take the online test because who knows who’s really pushing the buttons. It endangers public safety in an immense way.” We obviously disagree with her on the gun control issue thing, but she does make a good point. These online courses would make it easier for people to fake their way through certification. That same complaint could be said about any online course, though.

It is kind of a tough question. What do you guys think? Are online gun courses perfectly reasonable in the 21st century? Or does the fact that it could allow people to cheat the system or evade their local government’s laws make it a bad idea?