A couple of Georgia entrepreneurs are setting up a deluxe new $3.5 million gun range with a twist—of lemon. Called the Governor’s Gun Club, this soon-to-open indoor gun range applied for, and received, a license to sell alcohol.

It’s also slated to be a premium gun range with a state-of-the-art 19,000 square-foot indoor shooting range plus an archery range, and as mentioned, a lounge for club members to relax in after squeezing off a few rounds.

Of course this isn’t a place where you can drink and shoot, that would be absurd, but it is a place where you can shoot, then drink. No gun play will be allowed for intoxicated would-be shooters, and after patrons buy any drinks they are prohibited from steeping foot on the range for that day. We can’t think of a better way to spend an afternoon, really. 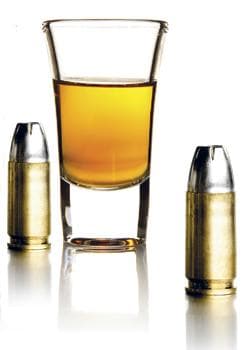 The lounge is also a privilege to select members of th Governor’s Gun Club. From their website: “Governors Gun Club has been granted permission to obtain a serving license in our members lounge. The lounge is not available to the general public or all club members. The lounge is only accessed by key cards issued to a limited group of members (Full Metal Jacket Members).”

Still, there are some complaints, which seem largely unfounded.  WSBTV found one woman, a neighborhood resident, who found the idea lacking in judgment.

Nevertheless the city council voted 4-1 in giving this range the go-ahead, reflecting Georgia laws regarding guns at bars and restaurants.

“Customers will have to order a drink with their identification card and once the card is accepted, and flagged, they cannot be checked back into the range that day,” said owner Kristina Brown in a statement, adding, “Georgia Law allows persons with gun permits to bring their weapon into a restaurant that serves alcohol, we are taking it even a step further.”

If you would like to know more about the Governor’s Gun Club and their 16-lane rifle range, 35-yard archery range, custom shop offering gunsmithing services, members lockers and humidors and of course, lounge for Full Metal Jacket members to sit, eat and enjoy a drink or two, visit their website here.