Commentary on Ronnie Barrett’s Open Letter to the Public (VIDEO)

Ronnie Barrett, Owner and CEO of Barrett Firearms Manufacturing is a patriot and a man of principle – he’s also one hell of a gun maker.

I was reminded of this fact when I read a recent letter he wrote to the public concerning the Violence Policy Center’s continued efforts to push politicians into banning .50 caliber rifles.

Initially, I was just going to pull highlights from Barrett’s letter that cut to the heart of the matter, but I thought it was so well written that I decided to reproduce the whole thing, though I did add some relevant videos:

In the never-ending battle to destroy our constitution, more “big lie” propaganda is being dumped on our elected officials. The rhetoric given forth by the Violence Policy Center (VPC) so easily deceived the legislators of California, resulting in the banning of fifty caliber rifles because they are powerful and their bullets punch holes when they strike. Even single shot .50 cal rifles were banned. It’s hard to believe we live in such a dark time that someone has actually banned a single shot rifle. But as you will see, this is the cleverest of all gun bans, and the end goal is civilian disarmament, the confiscation of your tools of liberty, your rifles. 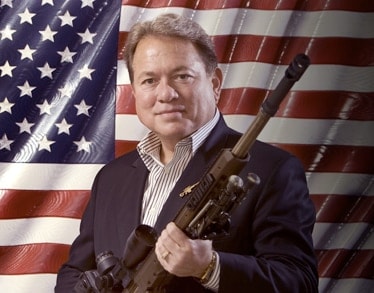 What lies before us is the continuation of the misinformation campaign, trying to coax yet another state to infringe upon the U.S. Constitution as California did. The anti-freedom/anti-gun movement has discovered how transparent they appear when they propose sweeping gun bans and now are successful by biting off a little at a time. Ever so small, many politicians are trading off your rights without you recognizing their violations.

First we had the “Saturday Night Special” which was all affordable handguns, then “sniper rifles” which were any scoped deer rifles. Those were obvious, too big a scam to go unnoticed, but with the creation and demonization of the term “assault weapon,” the Clinton’s Crime bill produced a wasted 10-year setback on your freedoms and safe gun design. Now comes another scam. This time they are shocked to discover that rifles are “accurate and powerful.”

This is the same bull the officials in the 1950’s fell for when they banned the self-unfolding knife. First the knife was demonized by giving it an evil name, “switchblade,” then we (the trusting public) were told that the problem of gang violence was solved with its banning. How ridiculous. It’s surprising they didn’t ban the leather jacket. In reality, gang violence was and is a serious social problem, but it was not related to manually unfolding verses self-unfolding knives. The elected officials voting to ban an object like a knife proved themselves unwilling or uncaring to understand the problem, and thus, incapable of any real solutions.

The handful of people that make up the VPC are solely responsible for the big lie on .50’s, claiming fantastic destruction capabilities. They manipulate fear by claiming terrorists will use these rifles on targets of our infrastructure. “They will shut down our airports in flames” they claim. VPC’s Tom Diaz refers to them as “super guns” lying to his dupable group of politicians, concealing the facts that there are many rifle cartridges that are comparable in performance (those will be added to the list in phase two). He is boldly telling these officials (and all who will listen) that the risk of terrorist attacks on these targets will be solved with the banning of powerful rifles, in this case, the .50 caliber rifle. In reality, terrorism is complex and will be defeated with improved intelligence. In this instance, the officials voting to ban an inanimate object like a rifle prove themselves to be ignorant of the problem of terrorism and are wasting time and resources.

You must understand the brilliance of this dangerous back door deception. Your politicians are being told that the fifty is a highly destructive cartridge that can destroy airplanes, fuel transport trucks and depot storages of fuel. They show videos like the one on 60 Minutes showing a 1/2 inch plate of steel being pierced by a .50 cal round while stopping a .308 caliber. This is all to confuse the people, those with little exposure to firearms; their impression concludes that the .50 punches holes in sensitive targets where other rifles cannot. Had they shot actual aluminum that is used on airplane construction, or aluminum or steel used in actual transport or tank construction, both the .50 and the .308 will pierce along with most all centerfire cartridges. But this, they must keep secret.

First, with the confusion of massive, (although incorrect) technical data and the hammering of urgency, the VPC demands a ban or strict regulations on rifles that chamber a cartridge that has the ability to penetrate targets. Sound ridiculous? It is.
VPC’s Tom Diaz appears often on TV with maps of Washington, DC, irresponsibly instructing where to position one’s self to illegally fire on vulnerable important targets of our government, promising these specific targets will be safe when .50’s are banned. He pressures politicians to act quickly on this URGENT legislation needed to make these terrorist targets safe, hoping they will act before the VPC lies are discovered.

Now slow down. A ban on a rifle because the cartridge it shoots penetrates targets? By the legislation naming and defining the targets that are damageable by rifle fire, and in this case, .50 cal. rifle fire, they create a new class of rifles. This new class is not defined by such foolishness as detachable magazines, flash hiders, or pistol grips. Instead, the test is; does it fire a bullet that punches a hole, and can the hole result in damage to specified and named targets? If so, the law-abiding citizen shouldn’t be allowed to have this, so they must ban this class of rifle before they can be misused. This is the very thing California has just passed!

“Now, we are only talking about those powerful .50 cals, right? It’s such a small class, no one will mind or even notice.” That’s what the VPC’s lies have lead you to believe. No, remember they are banning rifles because specific targets named in our infrastructure are susceptible to damage. Now tell me, what centerfire rifle cartridge won’t punch holes in those targets? What centerfire rifle cartridge is not powerful? Not many or not any? So, in order to comply with the spirit and intent of the law, the Attorney General or State Secretary must add those cartridges to the banned list. The big lie is exposed. They aren’t just talking about .50’s. They’re after your hunting rifles, centerfire target rifles-just about any rifle you own.

Unlike California, we cannot allow any of our local, state, or federal officials to be deceived with any of this “big lie” gun control propaganda. The U.S. has every gun law that could possibly be needed. Virtually every real world scenario of firearm abuse is already covered in some law that is currently on the books.

Many of you have inquired as to the outcome of the letter I wrote to Police Chief Bratten of the LAPD. Unfortunately, the chief’s position did not change. He continued to use his officers in the same deceptive practices formerly utilized with the city council. These few officers testifying in Sacramento ultimately contributed to the unconstitutional AB50 law being passed. It saddened me to have to tell members of the LAPD SWAT team that they would have to send someone for their rifle, because I refused to assist anyone or any organization that is in violation of the United States Constitution. In turn, the department arranged to pick up their un-serviced rifle.

Barrett cannot legally sell any of its products to lawbreakers. Therefore, since California’s passing of AB50, the state is not in compliance with the US Constitution’s 2nd and 14th Amendments, and we will not sell nor service any of our products to any government agency of the State of California.

I appreciate all the phone calls and e-mails from LAPD officers and civilians during that time, encouraging and supporting our actions. We shall see if other firearms companies will follow this path. I know many are corporately owned and feel like they are unable to risk the life of their company for the liberties of our nation, but if we lose our Republic, our freedom, what good is any of it? I am in the proud and fortunate position that many of our forefathers were in when they risked all for our liberties.

“Why stand we here idle? What is it that gentlemen wish? What would they have? Is life so dear, or peace so sweet, as to be purchased at the price of chains and slavery? Forbid it, Almighty God! I know not what course others may take; but as for me, give me liberty or give me death!” -Patrick Henry

This “ban large bore” insanity failed in Washington years ago, but that didn’t discourage the VPC. Now it’s resurfacing in city council meetings, in individual states, and it’s being reintroduced in Washington. NRA-ILA Executive Director, Chris Cox, once told me “These (anti-freedom, anti-gun) guys never go away, and they never quit.”

I’ve received thousands of e-mails and letters from you offering encouragement and support. Our Republic, our liberty, needs and demands your support. You must take action to guard your rights. First, find your State Senator and State Representative. Tell them not to fall for this scam. This lie depends on the elected official being naive about firearms and their capabilities. Stand ready to carry this same message to your U.S. Senator and Representatives. Know all of your elected officials’ positions on gun issues. DO NOT ELECT ANY ANTI-GUN PERSON TO ANY POSITION!

Position yourself with me in the battles that we must fight. You need to join the NRA, the Fifty Caliber Shooters’ Association, and the NSSF in order to stay informed. These people have been with me in the trenches, fighting for every inch of the liberty you enjoy.

Today we draw a line; there will be no more nibbling at our freedom. Today you stand idle no longer. Today you do something to save our country!

That was great, wasn’t it?

See, I thought it was great because unlike most call-to-action type letters gun owners are receiving in bulk from pro-gun celebrities and the top brass of the firearms industry (due to the fact it’s an election year), it showed that Mr. Barrett has taken some key steps and made some real sacrifices to fight for the rights of gun owners.

Now, let me be clear, I’m not disparaging the work that others do, it’s all relevant and it all helps to make a difference.  But, in reality, how many high-profile industry executives are willing to leave money on the table, to let profit take a backseat to principle?  Seriously?

This paragraph truly revealed Mr. Barrett’s character and commitment to the 2nd Amendment:

Barrett cannot legally sell any of its products to lawbreakers. Therefore, since California’s passing of AB50, the state is not in compliance with the US Constitution’s 2nd and 14th Amendments, and we will not sell nor service any of our products to any government agency of the State of California.

If all firearms manufacturers felt this way, opted to do what Mr. Barrett has done, the battle for gun rights would probably be over.  Government at the local, state, and federal levels would be forced to understand that attempts to disarm the civilian populace comes with serious repercussions, i.e. total and complete government disarmament.  Politicians would finally realize that it is the people who ultimately arm the government; it is not the government who arms the people.