First person shooter video games like Call of Duty, Borderlands 2, or Doom have a natural allure for gun owners. Shooting real guns at the range is a blast, but being able to blow the heads off of zombies or Nazis (even if it’s all simulated) can be just as exciting.

The only real problem with FPS video games is that it takes all the gun out of it. You have to aim with a joystick and you pull the trigger with a button. You get to see an assault rifle bobbing at the bottom right-hand corner of the screen, but at the end of the day you’re still just sitting on a sofa with a tiny hunk of plastic in your hands.

One Reddit user set out to marry video games with guns in a way that would make gamers and gun enthusiasts green with envy. Behold the ultimate video game controller: The modder tore the guts out of an airsoft rifle and filled it with enough hardware to act as a controller for the Xbox 360. The coolest thing about it is that the Reddit user positioned all of the buttons in areas where his hands would normally rest, so he can switch weapons, navigate the battlefield, and chuck grenades without fumbling over his weapon. It uses a 3-axis gyro/accelerometer combo so that he can literally aim with his gun.

And that’s not even the half of it. This Reddit user also intends to mount a 10.1-inch HDMI LDC monitor onto the top of the rifle so that the action takes up his complete field of vision. A mounted power source means that this thing is entirely self-sufficient – he could just as easily use it in his living room as out in a park. How great would it be to fire up this game near some abandoned industrial buildings and then play a video game that’s set near some abandoned industrial buildings? 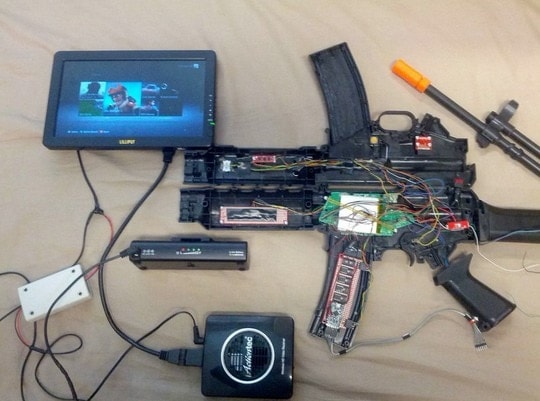 This is an interesting DIY project, but it’s easy to see how this type of technology could be refined over the next couple of years to appeal to gamers, gun users, and soldiers who regularly need to train for real-life combat scenarios.

In fact, the FBI headquarters at Quantico uses a similar virtual range with lifelike guns and digital targets. It’s not unreasonable to hope for virtual reality AR-15s in the next decade or so. The technology clearly already exists – we just need a gun-loving entrepreneur or a government-funded research project to turn this dream into a reality.

What do you guys think? If virtual reality guns haven’t already caught on, is that good evidence to support that idea that they will never catch on? Or is this awesome VR gun a peek at the future of both gaming and combat training?