Joe Perry, the lead guitarist of Aerosmith, recently made an appearance on the Discovery Channel’s “Sons of Guns” earlier this month. Not only did he share his love of guns, but he also had some strong words to say in a later interview about the problem of gun control in the United States. Turns out that Ted Nugent isn’t the only rock guitarist who stands behind the Second Amendment.

But first, let’s take a look at the “Sons of Guns” episode. You can get more information here:

Aww, we’re jealous. Just think of all the guns we’d buy if we had a few million bucks sitting in our bank accounts.

This video features Perry’s World War I-era Lyle cannon, which was designed specifically to fire lines to sailors who’d fallen overboard. Of course, that didn’t stop them from loading a bunch of explosives into a fake wooden boat and using the cannon to blow the whole thing sky-high. You know, just for the hell of it.

They also gave Perry and his family a chance to fire off a full auto M4, a dragoon pistol, and a black powder Kentucky long rifle from the War of 1812. 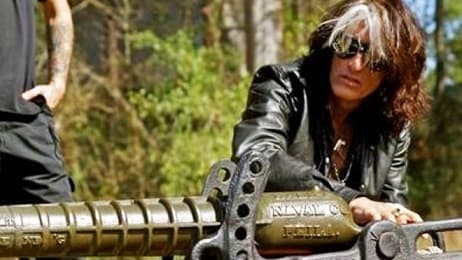 Perry has something of a love affair with old American guns (don’t we all). He said in an interview with Fox News after the “Sons of Guns” episode, “I was very fascinated by the time when firearms went from being fire sticks to being something people could use to hunt and to survive. That era, that ‘black powder’ era of firearms, has been my area of interest, and it turns out that Will from the show used to do the Calvary thing, so he is a ‘black powder’ aficionado.”

And like all gun owners, Perry has a healthy respect for the Second Amendment. Perry hopes for greater uniformity between the states so that gun owners don’t have to look up gun laws every time they hop into a car and drive across state lines.

He said, “It seems ridiculous that you can be in one state with your driver’s license and buy a firearm, and then in the next state it is totally illegal. There are real problems to that, but as soon as you bring up the subject and say ‘gun control’ it sets a red flag. It is definitely a difficult issue, and the bottom line is the Constitution is what it is, and I stand by everything that is in it. Right now, some of the statistics show that some of the safest places in the country are places where law-abiding citizens are allowed to have firearms, and the crime rates are low.”