“This is the weapon of a Jedi Knight. Not as clumsy or random as a blaster. An elegant weapon for a more civilized time.”  – Obi-Wan Kenobi, Star Wars Episode IV (A New Hope)

Normally Guns.com doesn’t do much with fictional bladed weapons.  Neither does the National Firearms Museum.  But when the home of the NRA’s gun collection held an exhibit a few years ago titled “Real Guns of Reel Heroes,” they included a prop from the First Star War movie.  The lightsaber is a “reel” gun. 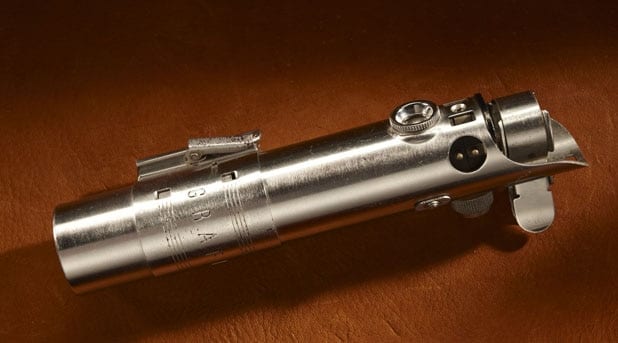 The controversy doesn’t end there.  After more than ten years in the museum, the prop’s authenticity is getting more and more scrutiny.

The weapon of a Jedi Knight

We begin, as Lucas did, in the middle.  The first lightsaber we see in these films is the one Obi-Wan presents to Luke.  It had been Luke’s father’s, until his father’s death.  Later, Luke will build his own lightsaber.  That is part of a Jedi’s mythical training.  But for most of Star Wars and The Empire Strikes Back, Luke carries this lightsaber.

Tracing the cultural influence of the sword in the Star Wars universe is difficult, as so many cultures used swords.  But this is a strong case to be made for the Samurai aesthetic of Japan.

The physical components of the prop are easier to understand.  Luke Skywalker’s lightsaber is really easy to construct.  Or it was, back when all of the parts were readily available.

This video shows the lengths that some fans go to to reconstruct replicas.  Amazing dedication to craft.

The tube, the main part of the handle, is nothing more than a battery holder for a Graflex camera flash.  This was a large device that attached to the side of large cameras.

The original Graflex flash had a large aluminum dish on the top to direct the light.  Once removed, it looks much more like a lightsaber.  These are about the size of D-cell Maglites, and come in three cell variants and two cell variants.

But there were some additions. Some have guessed that the black rubber hand-grip is made from cut up windshield wipers.  The detail oriented folks at PartsOfSW.com suggest “hard black plastic T-track from old cupboards with sliding doors.”  The lights along the side come from a Texas Instruments Exactra 20 calculator.

Meanwhile, back at the National Firearms Museum…

The lightsaber prop at the NRA’s Museum is missing these extra details.  It looks like an original Graflex flash without the dish on top.

But there are other odd inconsistencies.  The museum has two props.  One is attributed to Obi-Wan, the other to Luke.  Both are referred to as “back-up” props.  But what does that mean, exactly?

And who made the originals?  They were sold at auction in a liquidation of Ellis Props, a reputable prop house in California.  A good bit of the interior scenes for A New Hope and The Empire Strikes Back were shot in England.  Bapty’s, a London based prop house, made many of the props. Others came from Elstree Studios, where A New Hope was filmed.

Elstree sounds a bit like Ellis.  Could the confusion be that simple?

For an in depth look at the evolving scrutiny of the prop, I suggest reading the work of Jason De Bord, President & Editor in Chief of the Original Prop Blog, LLC.  De Bord has documented this very well.

He shows photos of the actual auction that show the auction tag for the prop attached to a larger (three cell) Graflex tube.  Though the tag matches the one on display at the National Firearms Museum, it isn’t the same Graflex Tube.  This one is longer. 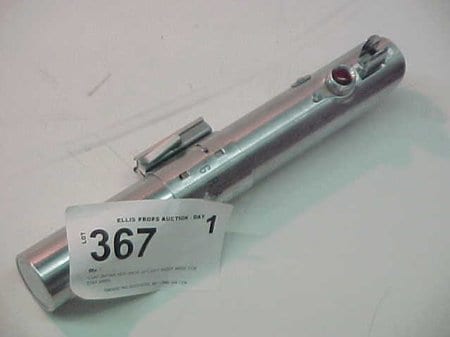 The Obi-Wan prop is nothing like the prop in the Museum’s holdings.  It was made form many different components, including a rifle grenade, a faucet handle, and pieces from a jet engine.  The one at the museum has no extra pieces–just the tube. 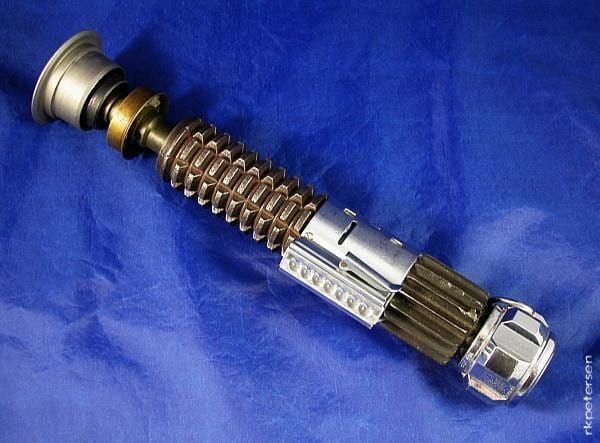 So what does the museum actually have on display?

In a letter to Jason De Bord concerning The Original Prop Blog’s investigation, Jim Supica, Director of the Museum, writes:

“…Our understanding is that both were represented in the auction as having been from the 1977 Empire Strikes Back film, as indicated by hang tags, and not used in any of the subsequent Star Wars movies.

Beyond that we have no additional provenance on the pieces.

There have been others who have questioned the authenticity of this piece. Our Senior Curator Phil Schreier reports “Supposedly, all the light sabers are at Skywalker Ranch, George Lucas’s estate in California. The film was shot principally at Shepperdton Studios in Surry, England. Most, if not all, of the studio props were supplied by British prop houses (Bapty’s?) I have never researched the Ellis history to see if they actually supplied any props. The auction, as we can see from the blog, publicly advertised ‘Star Wars’ props. As far as I know, no one has formally cried foul over the sale or descriptions.”

Both artifacts are cataloged by the NFM as “back up” props for Star Wars, based on the auction descriptions.
The National Firearms Museum is of course committed to accurate representation and preservation of the history associated with the firearms and other artifacts we display.”

Why does it matter?

It only really matters to nerds like me.  And to museum curators and directors who are doing their best to build reputable collections.  And The National Firearms Museum is a fine, upstanding institution with an epic collection.

The prop may simply be a Graflex tube that someone has passed off as a piece of movie memorabilia.  There were fliers for the original auction that advertised old camera equipment, including a complete Graflex flash. 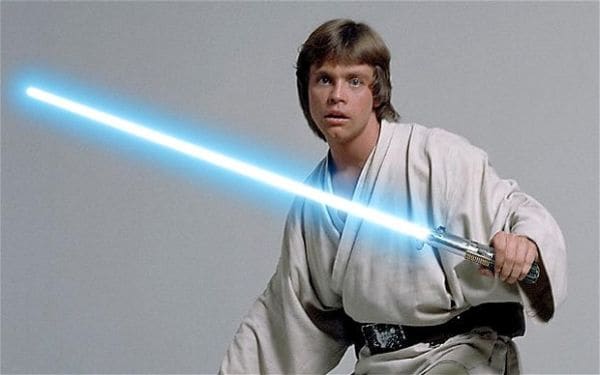 Provenance is everything.  Without provenance, all you have is a battery tube from an busted camera flash.  The National Firearms Museum is above that.  Some unscrupulous folks out to make a quick buck might not be.

Someone out there knows the truth about these props.  If you have any information, I’d love to hear it.