Bill Hicks & Co. is a distributor of firearms and they’ve put together a limited edition pair of SIG pistols that are extremely zombie-themed. They include a full-size 1911 and a subcompact P238, for when, well we suppose, that, ah, the undead come to mug you and you can’t open-carry?

These are pretty decent-looking pistols, especially if you’re into radioactive green and biohazard symbols and blood spray. It’s clear that Bill Hicks & Co went through a lot of effort to leave no detail overlooked.  The 1911 is a traditional model without a rail. The hammer is skeletonized but the long trigger is not. 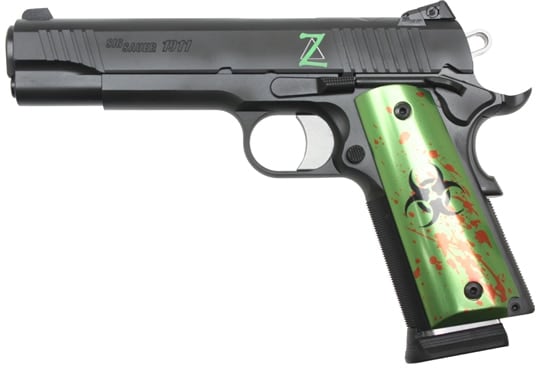 The front- and backstraps a finely checkered and the slide has serrations fore and aft. The gun has standard, not ambidextrous controls and the grip safety has a smooth memory button and beavertail. It’s outfitted with fully-adjustable Novak-style sights and comes with 8-round magazines.

The P238 is a matching design, with night sights (including a TruGlo TFO front fiber-optic night sight) and one flush-fitting 6-round magazine and one extended 7-round mag. 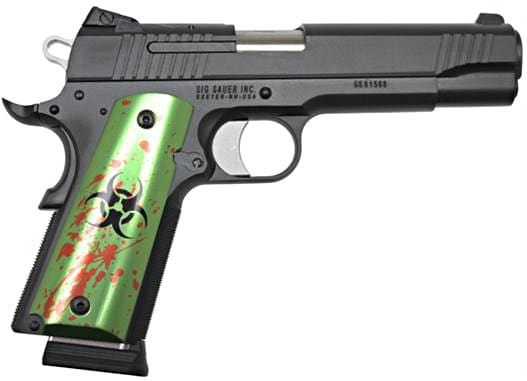 Although they are only now being officially announced, they have been distributing for a few weeks now and are in stores now. The full-size Zombie Edition 1911 runs a bit under $1,000 and the P238 under $600. They may cost a small amount more than comparable non-zombie edition SIGs but not much at all.

But we can’t help but think that, in a zombie apocalypse, you’d maybe want some other handguns. Yes, .380 ACP cartridge design has come a long way and we have no doubts that with good placement you’d have no issues dispatching a few of horde, but that maybe you’d want something other than a pair of green and black single-stacks? 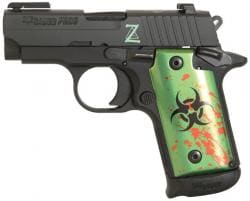 Bill Hicks & Co and presumably SIG both put a lot of work into making these guns, with the etching and polished aluminum grips. But when you watch an episode of “The Walking Dead” how many green guns do you see? Does Deputy Grimes’ Python have biohazard emblems carved into the grips? These miss the point.

That being said, if you like the theme, than this is a bonanza of zombie goodness. They’ve updated the classy style of the 1911 and the P238 with a hint of crimson in their electric bilious green highlights. And they’re not really priced out of line with standard SIGs of the same models without the makeover, so double win on that front.