On Wednesday, NBC News reported that the controversial “Jesus rifles” are still being used by American troops serving overseas.

The “Jesus rifles” were first publicized in January 2010 when the media learned that a military contractor was inscribing biblical references on the scopes of standard-issue rifles carried by U.S. soldiers on combat tours in Iraq and Afghanistan.

The ensuing media shitstorm (see video below) forced the Pentagon to order the removal of biblical references on all service rifles.  But now, almost three years after the order was given, the code is still appearing, causing some soldiers to argue that it’s creating an unnecessary risk.

“I honestly believe that this is a dangerous situation. It literally could be a matter of life and death for a soldier if he fell into the wrong hands,” said an Army officer who spoke to NBC News from Fort Hood, Texas. “The fact that combatant commanders are not following (rules set by Department of Defense) commanders is very disturbing to me.” 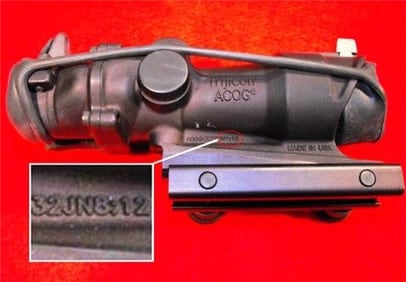 The main fear is that the “Jesus rifle” adds fuel to the fire that the U.S. is waging a crusade against Islam.

In the photo taken by the Army officer who spoke to NBC News on the condition of anonymity, one can see the code stamped into the metal of the ACOG (Advanced Combat Optical Gunsight) ends with the model number “JN:12,” which refers to John 8:12:

“Then spake Jesus again unto them, saying, I am the light of the world: he that followeth me shall not walk in darkness, but shall have the light of life.”

The maker of the sights, Trijicon, Inc., agreed to stop printing gospel references on sights for service rifles in 2010 and provided the Department of Defense with modification kits for the removal of the code on existing rifles.  But for one reason or another, it appears that the U.S. Military did not make it a priority to erase the code.

NBC News asked Army officials why the “Jesus rifles” were still in circulation.  In an email, one official said that, “corrective measures the Army took to remove the code were still ongoing.”

“We had to take steps to ensure the corrective measures did not impede ongoing operations in theater, but we’ve got procedures to catch this at multiple points,” Matthew Bourke, in the U.S. Army Media Relations Division, told NBC News in a statement. “We’re making good progress.”

In the meantime, critics of the inscriptions, like the officer at Fort Hood, are worried about the fallout that might result from the failure to remove the code.

“Do all the Afghans and Taliban know about this? Probably not. But the ones who do could ultimately affect the life of a soldier,” said the Ford Hood officer. “There’s absolutely no reason this couldn’t have been done in the first six weeks. And that just leads me to wonder why is the Army leadership not taking ownership of the responsibility of completing this task?”