Mankind has been dreaming of laser guns for decades, and we just keep getting closer and closer. The military has already been tinkering with weaponized lasers that can detonate IEDs or take down incoming missiles, but it will probably be a while before we see laser pistols sitting alongside Colts and Glocks at gun stores.

Fortunately, we can always just build our own!

A couple of do-it-yourselfers over at North Street Labs have created a real life laser gun strong enough to set things on fire or cause bodily harm. Take a look at this sci-fi gun in action:

They explain on the guide that laser technology has progressed in leaps and bounds over the past couple of years. Companies graduated from weak infrared lasers to “terrifyingly powerful” blue/violet lasers, which are about 400 times stronger than their predecessors.

By themselves laser devices look like unwieldy hunks of metal. The old school Nintendo Zappers (the things used in the Duck Hunt game) are conveniently big enough and have the built-in hardware that you need to build a bona fide laser gun.

Before we get too far, though, we should point out that we’re getting into shaky territory with laser guns. Keep in mind that a lot of laws probably haven’t caught up to laser technology, so you should definitely check your local laws and ordinances before building one of these things. Lasers might fall under some sort of catch-all “other” category that also includes things like grenade launchers and flame throwers. 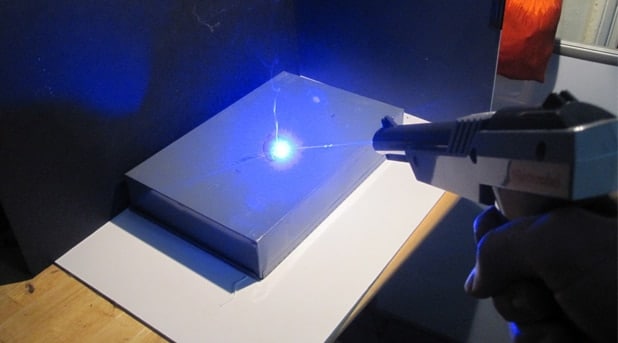 If you do build one of these things, we have to add a fifth rule to the four sacred gun laws. The fifth rule is to always wear safety goggles with the appropriate wavelength and power rating. Keep in mind that lasers can bounce off of reflective surfaces and hit the user. One little accident and you could permanently blind yourself or one of your buddies.

But enough of that – let’s get into the nuts and bolts. The step-by-step guide will tell you how to make your own laser gun. The only problem is that this isn’t a very good project for beginners. Some of the steps are rather technical, and many pieces require specialized power tools and electrical equipment.

If you just happen to have metal cutting tools, a bunch of high powered lasers, and a soldering iron sitting in your tool shed, then you’re just a few hours away from being able to act like Han Solo and immolate cardboard cut outs of Darth Vader.