If you took a survey on which politician presented the biggest, existential threat to the 2nd Amendment, there’s a good chance that New York City Mayor Michael Bloomberg would be among the leading candidates.

As you know, Bloomberg is the co-founder of arguably the most aggressive pro-gun control organization in the country, Mayors Against Illegal Guns.  The organization is a particularly potent force because of the political connections it forges all around the country (more than 700 mayors have joined the coalition since its inception in 2006). 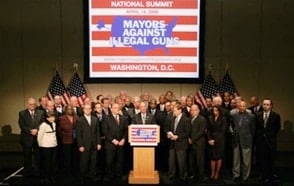 See Bloomberg realized that if he’s going to enact stringent gun regulations on a massive scale, the best way to do it is not by trying to win the hearts and minds of a largely pro-gun public (which is what the majority of gun control organizations attempt to do to, albeit to no avail), but by targeting feckless public servants in a position of power.

To his credit, it’s a brilliant move.  After all, the public isn’t going to willfully disarm; one has to persuade politicians to force us to disarm, to have them push policies that on the surface claim to be “crime prevention measures” that are in the “best interest of the community,” but are, in reality, nothing more than a way to keep guns out of the hands of the law-abiding.

In any event, I’m not telling you something you don’t know, i.e. Bloomberg is an evil genius when it comes to gun control.  He’s effectively killed the 2nd Amendment in NYC and if given the chance, he’d do everywhere else – or would he?

Blake Zeff, a former presidential campaign aide to President Obama and Hillary Clinton, argued in a recent article that Bloomberg is essentially a hypocrite when it comes to gun control.  That is, he’s all bark and no bite on the issue (an assessment of the mayor that I found rather perplexing).  Zeff wrote:

Bloomberg is among the most outspoken and generous advocates for gun control in the nation. He rails against politicians who take the easy way out by bemoaning the scourge of gun violence but refusing to confront the politically powerful National Rifle Association. He spends millions funding Mayors Against Illegal Handguns, and developing a policy agenda for combating and solving gun crime, including the imprint of markings on shell casings—a process called microstamping.

And, as we’ve learned yet again today, he gives tons of money to Republican officials who stand in the very way of these same gun safety measures.

The latest example comes today, with news that the mayor has pumped a million dollars into the New York State Senate Republicans, a staggering and perhaps unprecedented donation to a state legislative conference. (This follows Bloomberg’s support for the re-election of Senator Scott Brown of Massachusetts, an N.R.A.-approved Republican running against a liberal Democrat.)

Now, as Zeff correctly pointed out, politically speaking Bloomberg’s not a one-trick pony, he cares about other issues, which may be in part why he endorses pro-NRA Republicans.  But still, there’s an apparent contradiction here and one cannot deny that he’s straddling both sides, as Zeff noted:

This is not complicated. If Michael Bloomberg wants to gain traction in pushing gun control laws, financially supporting candidates who actually share this agenda, and trying to oust those who do not, is the better use of his money…

But he shouldn’t feign outrage or powerlessness when nothing happens to achieve his gun control agenda. He has billions of ways to move things along, if he’d only put them to use in a way that isn’t a self-contradiction.

It’s an astute observation and it makes me wonder what the pro-gun control community thinks about this?

Here’s one of the clarion voices of the movement donating to NRA Republicans, yet at the same time lamenting that more is not being done to pass meaningful gun control reform (recently, Bloomberg criticized both President Obama and Romney on the issue).

Now, the other thing it makes me wonder is what the heck is Bloomberg up to.  As mentioned, he’s a smart dude.  And I have no doubt that he is, in his heart of hearts, pro-gun control.  So, the question is, what is he up to here?  What’s he overall agenda?  Do his campaign contributions come with strings attached?  Is he hoping to flip some of these Republicans to his cause later on?

I don’t know.  But, I get the feeling that Bloomberg is playing chess, not checkers with his gun control agenda.