But don’t let all the phallic symbols of power fool you. This is less of a testosterone romp and more of a “Hey, look! Those cigars are shaped like bullets. We like bullets!” type of thing. Tactical Fanboy spotted these bullet-shaped cigars at a booth in a gun show, and ever since we found out about them we’ve been dying to get our hands on a few.

It’s pretty clear from the high-caliber packaging that the manufacturers are aiming for the gun-lover audience, and they thoroughly back that up on their website. 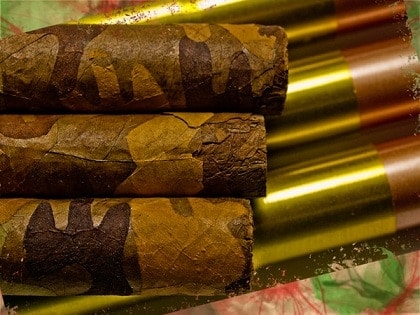 They promise, “Recon Cigars are associated with rugged military characteristics that represent strength, fortitude, and honor.”

They add, “Our strategy is uncomplicated. We specialize in developing tobacco products for niche markets.” That’s a much more of formal way of saying, We like guns and cigars because both are awesome! Deal with it!

These guys are really committed to the gun thing. Even when you unwrap the “piercing in its presentation” bullet, these cigars feature “hand cut and hand placed patches of Candela, South American Cameroon, and Criollo-Maduro wrapper that gives them a woodland-esque camouflage look.”

These Recon Cigars promise to be more than a novelty item. The manufacturers will donate a portion of all profits to the Hope for Warriors Foundation, a group that is devoted to improving the lives of post-9/11 service members and their families.

It’s for a good cause! At least, that’s the excuse that you can use when you’re significant other returns home only to wrinkle her (or his) nose in disapproval at the smell of cigar smoke. Your significant other can’t argue with helping wounded veterans, right?

All you’d need to do is combine this cigar with one of those classic gun lighters or a high-powered laser gun, and you’d be all set. That’s smoking in style.