Even though it is often recommended by shooting instructors world-round, few people ever end up actually getting a .22 caliber handgun as their very first gun. I know mine was a .357 Ruger, and most other people I have talked to bought .38 Specials or a 9mm, but not a lot of folks get a .22 despite the versatility the gun adds to your gun locker or their near universal endorsement as must have training weapons.

And that’s a shame, because are still there are a lot of uses for a good .22 handgun.

One of my first handguns was my grandfather’s .357, and I put it to many of the same uses that he did, specifically as a carry pistol for those days when you see a lot of small game while deer hunting but not any deer. Problem was this caliber was far 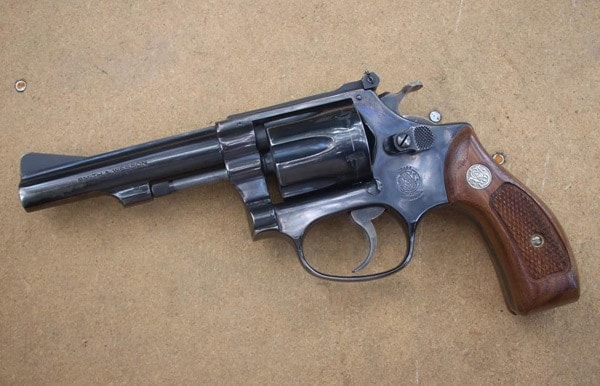 too big for most of the small game I was seeing (the caliber was debatably appropriate for whitetails) and there is no worse feeling than seeing a nice grey squirrel or fat grouse at close range and not having a way to bag them except a large caliber handgun or your big game rifle both of which run risk of turning the animal into instant stew meat.

For a decent packing pistol for the woods I would not consider anything without a four inch barrel in either revolver or pistol form, as you need all the sight radius and power you can get.  There is quite a bit of difference in the power between a .22 Long Rifle round fired from a long gun versus a short barreled handgun and before getting a .22 as your support gun for hunts, I suggest you check your local game laws to make sure you are even allowed to take game with this lower caliber.

What if you want to buy a handgun strictly for small game hunting though? Well there are more choices today than there was even ten years ago. I have hunted with my Colt Woodsman, but the first really fine gun I used was a long barreled Old Model Ruger Single Six 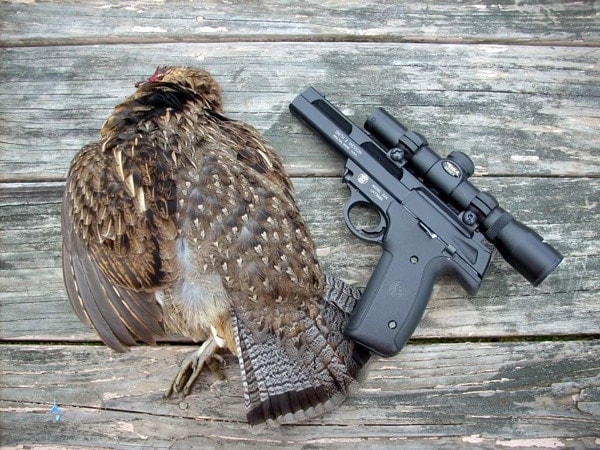 that I pretty much kept the .22 Long Rifle cylinder in the whole time I owned it. That Ruger had the adjustable sights and the 6 ½ inch barrel and it accounted for more squirrels than I can remember. I later owned a second Old Model Single Six but it did not have the accuracy of the first one I bought.

For the money I think one of the nicest, out of the box guns on the market today that’s set up for the woods is the Smith & Wesson Model 22A. I purchased one and threw a simple little BSA 2x fixed scope and went hunting with it the day I bought it.  The first animal I bagged with it was a fine ruffed grouse—a very satisfying hunt considering the relative difficulty. For the cost of the gun and the scope it was less than many .22 rifles you will find out there.

Ruger introduced a couple of years ago their Charger pistol based on their 10/22 rifle and for the small game or varmint hunter it is a fine choice except for some states like New York where gun control keeps it legally out of the woods—a definite loss for us. A fine and relatively cheap alternative is the KSA Chipmunk pistol, which you can get in .22 Long Rifle, .22 Magnum, or .17 HMR. You can either use the open sights or mount a scope and you are ready to roll. 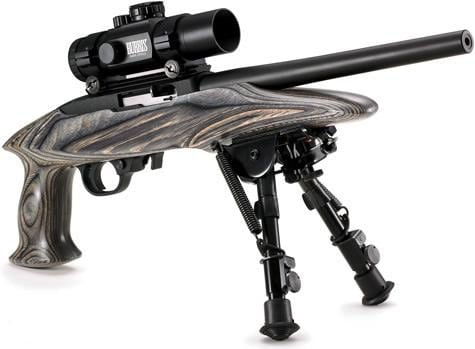 One of major reasons people do and should get a .22 pistol though is for practice. It costs a lot less to burn up 50 or one 100 rounds of .22 ammunition than a box of cartridges for anything else and handgun manufacturers have followed suit by making rimfire versions of their guns. The Walther P22, Smith & Wesson M&P .22 and a host of others are nearly identical to their big bored counterparts.

In kind, I highly suggest if you are looking into buying a .22 to help you train up to a larger, more defense or competition appropriate caliber, you purchase a style of gun similar if not identical to the gun you plan on ultimately shooting.  Becoming familiar with the feel and furniture on your pistol is almost as important as shooting it precisely.

No matter what .22 pistol or revolver you get, you need to practice with it just like any other handgun.  This is especially true if you plan on taking it hunting as well as you will need to test out a variety of ammunition to see which one works the best. Not all ammunition is alike and I can tell you that even the basic .22 high velocity loads shoot to various points of aim. My Colt and other guns are off as much as three or four inches between similar loads of the same bullet weight and velocity, so if you plan on hunting with their .22 pistol, sight it in with one load the gun likes and keep it there.

Many shooters overlook the .22 handgun for whatever reason, especially when they first start getting into shooting.  They shouldn’t.  Hunting, target practice and just plinking with the rimfire pistol can be a great way to get ready for either big game hunting or to keep your skills sharp in general. You can do so more than you can imagine with this one gun and practicing with it will take precious time of your learning curve, meaning a good .22 is worth its weight in gold.