Vice, the New York City based Canadian publication, put together this 40-plus minute documentary exploring Mormon colonies at the nexus of Mexico’s drug war in northern Chihuahua.

Although the film takes an occasional potshot at the Mormon faith (it makes some snarky comments about magic underwear and an antiquated practice called “Blood Atonement”) and cites some questionable statistics (“90 percent of firearms in Mexico are trafficked from the U.S.” – there’s no source for this percentage and this is a topic that is subject to debate), it does a great job of showing how the drug wars have ruined Mexico, not only for the Mormons who live there but for all citizens. 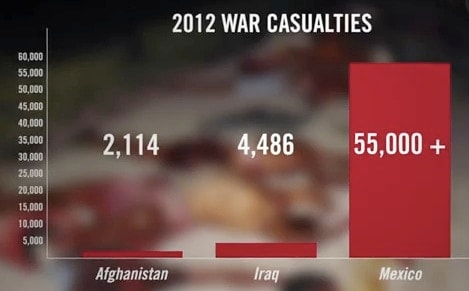 Between the kidnappings (in 2011, there were approximately 49 kidnappings per day), the homicides (over 55,000 drug-related homicides since 2006), and the constant stress and fear citizens live under, it’s apparent that Mexico has gone to hell in a handbasket.  As a result, one obvious question emerges, what can Mexico do and what can the U.S. do to end the drug wars?

While the answer to that question remains elusive (everyone’s got theories, such as the legalizing illicit drugs), what is clear, and what the host of the documentary Shane Smith pointed out, is that the “War on Drugs” is a losing strategy.

After decades of fighting the “good fight,” two things are evident, (a) there are more drugs available at cheaper prices in American than ever before and (b) cartels in Mexico are more powerful than ever before.  The bottom line, the governments of Mexico and the U.S. have lost the war.

So, given this sad reality, where does this leave Mormon settlers who’ve lived in Mexico since the mid-19th Century?

Well, in a very precarious position.  Really, like all law-abiding citizens in Mexico, they’re targets.  See, because Mexican authorities regulate the use, sale, and transfer of firearms so heavily, it’s almost impossible for any law-abiding citizen to legally obtain and/or possess a firearm for self-defense.  So, when well-armed cartel operatives come knocking on the compound doors of the Mormon community, members of the church are defenseless against attacks.  They are sitting ducks.

Actually, it’s probably more accurate to say that they were sitting ducks.  As the documentary revealed, Mormon leaders have decided to take a para-military approach to the cartels.  That is, in addition to setting up guard towers, community patrols, and checkpoints along the roadways, they’ve armed the colonies with guns smuggled in from the U.S. – albeit in violation of Mexico’s stringent gun laws.  And in doing so, they’re making a statement to both the government and the cartels: “we’d rather be law-breakers than victims.”

As for how all of this relates to GOP presidential hopeful Mitt Romney, well, his father, George, was born in Mexico.  And some of Mitt’s relatives still live down there in the Chihuahua colonies.  So, if Romney wins the election, his family and his fellow Mormons want to know what he’ll do to fix things, i.e. how will he crackdown on the drug trade?

Currently, Romney’s positions on immigration and the legalization of marijuana run contrary to what many in the colonies feel would provide relief from the cartel violence.

In the upcoming debates, it’ll be interesting to see how both candidates, not just Romney, address questions that deal specifically with Mexico’s drug violence and the U.S.’s drug addiction.  I think we’d all like to know if Obama and Romney have any real solutions in mind or if they plan to simply double down on failed polices.

In any event, you have the time, check out the documentary and let us know your thoughts.  Did you like it?  Did you find it to be informative?