You frequently come across stories wherein a late-night store clerk has to open fire to defend his life from an armed thug. It’s rare that one of these clerks also has to protect the lives of a loved ones.

But in this shooting case, Theresa Smith of White Plains North Carolina was forced to defend herself, her business, and her beloved husband against a pair of thieves.

It all happened Sunday night around 9:30, just 10 minutes before Smith typically closes up for the night. Her husband, Barry, had just finished closing up at another business and he had 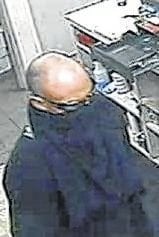 come to Mrs. Smith’s Cupboard No. 2 to help her finish up for the night. When he arrived two men – one of them with what appeared to be a black, 9mm semiautomatic handgun – grabbed Mr. Smith, pressed the gun into his back, and forced their way into the store.

Mrs. Smith could only stand and watch helplessly as one man robbed the store while the other held Mr. Smith hostage. A customer was also there at the time, who dove to the ground “like he was sliding into home,” Mrs. Smith said.

As soon as the men turned to leave, though, that’s when Mrs. Smith went into action. “It made me mad more than anything because my husband is a fantastic person,” Mrs. Smith later said.

Smith grabbed a .38-caliber revolver and “shot as much as that gun would let (her) shoot.” None of the bullets struck their intended targets, but now the Cupboard No. 2 has a bullet hole in the door frame as a permanent reminder of that harrowing night.

Evidently, getting a gun unloaded in their direction wasn’t enough to discourage these thieves from selecting a new line of business. Police have arrested three men after another convenience store robbery. The authorities suspect that some or all of them were also involved in the incident with Mrs. Smith. They face charges of robbery with a dangerous weapon and second-degree kidnapping.

At the very least, the incident should discourage other would-be thieves from setting their sights on the Smiths’ cash register. Mrs. Smith added, “I did what I thought was right. I’m not your typical female.” And despite the fact that the whole ordeal “was a nightmare,” Smith was back at work on Monday.

It’s hard to say what Mrs. Smith could have done better in this situation. We have to commend Mrs. Smith on her actions. She and her husband both came out of the situation alive, which is what matters the most. But what could she have done differently?

Having better aim probably would have helped. No offense to Mrs. Smith, of course – we suspect our hands would probably be shaking after a couple of thugs threatened the lives of our loved ones, too. Drawing the gun earlier probably would have had very different (and possibly much more lethal) results.

If you had been in Mrs. Smith’s shoes that night, what would you have done?