October is Breast Cancer Awareness month.  Close to 300,000 women in the United States are diagnosed with some form of breast cancer every year.  Close to 40,000 die form the disease annually.  The cure remains allusive, yet many people have dedicated their lives to fighting the cancer and finding the cure.  But they can’t do it alone.

One of the most logical ways to help in the fight is to provide monetary support for research.  We at Guns.com are happy to report that more gun nuts like us are getting involved.

Let’s start with the guns

Sometimes a pink gun is just a pink gun.  They are popular enough.  Sometimes a touch of pink on a gun might mean something more. 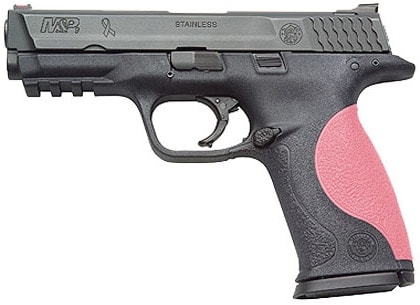 Take this modified version of the Smith & Wesson M&P.  Smith & Wesson is giving a portion of its proceed from sales of the M&P9 JG Pistol to help fund breast cancer research.

This 9mm M&P was designed back in 2009 in collaboration with Professional Shooter Julie Goloski Golob. The pink grip insert is replaceable, and the gun comes with small and medium inserts in pink, and all three sizes in black.  The “awareness ribbon” is engraved into the slide.  MSRP on the gun is $619.

Smith & Wesson hasn’t said how much of the money will go to research, but they donated the first allotment to the Susan G. Komen for the Cure back in May of 2009.

Raising money for breast cancer research isn’t new territory for the gun community.  Sure, Smith & Wesson has deep pockets. They can afford to reach deep and help with what is a truly worthy cause.  But what about those of us who don’t have corporate identities, or those of us who would like a new gun, but can’t afford one?

Well, look local.  There are a surprising number of individuals making donations, holding auctions, and organizing shoots.  You just have to find them.

The B-Team gun club, out of Hampton Roads, Virginia, is selling shirts to raise money.  And they look sharp.  Have $20 to spare? 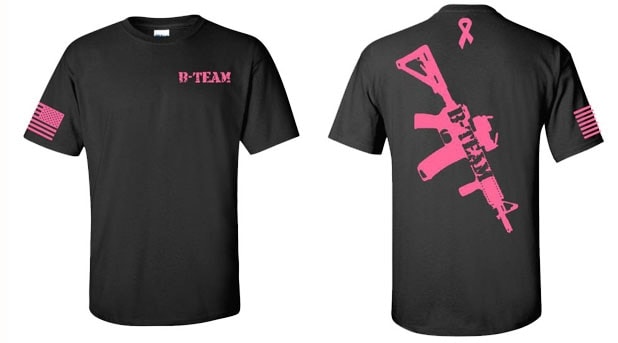 Back in June, the 2012 Alaska Ladies Shotgun Classic was held in (where-else?) Wasilla.  The proceeds form this shoot went to help fund research.

That’s the point.  We can help in ways we’ve never thought of, like buying a gun, or shooting with some Alaskan Ladies.

But there’s some controversy

There always is, when it comes to guns.  Why should this be any different?  Thinkprogress.org, among many others, seem to think that taking money from gun companies, or shooters, links them with something inherently evil.

Seems odd.  Let’s forget for a moment that decent honest people want to help in any way they can.  The efforts of charitable individuals are easy enough to overlook, but Smith & Wesson’s contributions are probably not so easy to ignore.  And that’s what many would ask of researchers and organizations that are currently accepting this funding.  They want researchers to turn down “gun money.”

But we’re Guns.com.  You might guess how we feel about the issue.  If Smith & Wesson wants to raise money for breast cancer, than let ’em.  Support ’em.  There are enough people out there raising hell about this.  We can certainly retaliate by offering a show of support. 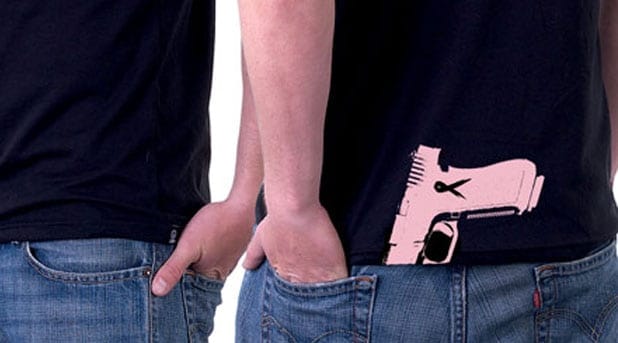 I like the t-shirt idea.  It’s the way I conceal most of my guns, which keeps them from being seen.  But this shirt, from Jackson-Marley.com, looks like a sharp way to show support.  Or you could always go to nbcam.org and donate and let them know how you feel about the issue.

I know I’m preaching to the choir, but if those opposed to Smith & Wesson’s efforts were to put their vitriol and energy into fighting breast cancer, instead of fighting those of us who are helping to fight breast cancer, we might find that cure just a little bit faster.