Failure to register a firearm or ammunition in our Nation’s capital is a misdemeanor charge that carries a penalty of up to a year in jail and a hefty fine.  That is the law regardless of whether one is a D.C. resident or an out-of-towner.

At least one lawmaker believes that there needs to be some wiggle room for nonresidents or tourists who unknowingly break the law.

Back in August, D.C. Council Chairman Phil Mendelson introduced a piece of legislation that would allow prosecutors to give “administrative dispositions” to nonresidents who are slapped with charges relating to unregistered firearms or ammunition, essentially letting them off the hook (no criminal charges, although a small fine would probably still apply).

In an interview with the Washington Examiner, Mendelson explained that his proposal — Administrative Disposition of Weapons Amendment Act of 2012 — would address “honest mistakes” by law-abiding visitors who are unaware of D.C.’s stringent gun laws.

“The current law may be too harsh for that limited circumstance,” he said. “It would be very limited to a circumstance where there is no other charge, no other issue, no reason to be concerned about the safety of citizens or government officials.”

Mendelson’s proposal garnered widespread support from those within the gun community who believe that this is a baby step in the right direction (some hope that this will be a lynchpin to other pro-gun reform, such as expanding the provision to cover D.C. residents as well).

But, and perhaps surprisingly, Josh Horwitz from the Coalition to Stop Gun Violence also backed the bill, telling Legal Times that it would only rarely come into play and was a commendable attempt by the council to work with all sides of the gun control debate.

So, to be clear, both the gun control community and the gun community favored Mendelson’s bill. 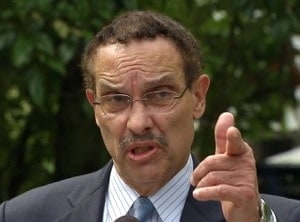 Therefore, it would stand to reason that D.C. Mayor Vincent Gray’s administration would have no reason to oppose the measure, right?

Fois also argued that the bill is a “solution in search of a problem,” noting that, at most, 18 people last year would have qualified for administrative dispositions.

Mendelson countered, arguing that the number of people that might be affected is irrelevant.  He cited other laws, like the D.C. Innocence Protection Act that rarely come into play but provide important protections nonetheless.

The council is accepting public comments on the bill through Oct. 8 and is expected to render a decision in the coming weeks.