The Wiki Weapon project lead by Cody Wilson of Defense Distributed is the first major attempt to develop plans for a 3D-printable firearm. As he states in his video introduction, the idea isn’t new or original, but despite years of discussion, nobody has actually worked out all the details, at least not publicly.

And the plans will be open-source, like software, compatible with open-source CAD software, free for anyone to use, update, modify and share. The long-term goal is to make a reliable, hopefully reusable firearm using nothing more than a RepRap, an inexpensive 3D printer that is designed to be able to replicate all the parts needed to replicate another RepRap, which is also open-source, free for all.

Unlike other recent 3D-printed firearms, the Wiki Weapon standard eventually calls for no non-3D printed parts. Other people have used 3D printers to manufacture AR-15 lower receivers at home, which legally speaking counts as a firearm, but then use off-the-shelf parts and complete upper receivers to build a functioning rifle. Anyone with any AR experience knows that a lower, without the commercially-produced parts, is just a paperweight with a serial number.

So with that idea in mind, Wilson took the idea public. Here’s his introduction.

Immediately, the Wiki Weapon project suffered a major blow. After setting up an online fundraiser, the host firm, Indiegogo, put a hold on the money they’d raised, citing their policy of not raising money the fund the sale of firearms. Despite the fact that the Wiki Weapon project isn’t selling or distributing firearms—just free plans for guns—they had to set up their own fundraising website.

It didn’t take long for them to meet their fundraising goal, despite getting the boot—with the help of an anonymous donor who has pledged to dollar-match the crowdsourced funds. “They wanted to get this done,” he said in an interview with Forbes. “I think it shows they really believe in a future where the gun is inalienable… a kind of faith in American individualism, the sovereignty of the individual.”

With the first leg of the project completed, the team needed to start working on the prototypes.

Prototype development would take place inside a Stratasys 3D printer. Stratasys is not like RepRap. They leased an entry-level commercial-grade 3D printer. While their plans call for compatibility with the cheap and open-source printer, they wanted to be able to rapidly produce prototypes for testing. Given the nature of 3D printing materials, it’s not necessarily safe to test-fire a Wiki Weapon more than once. 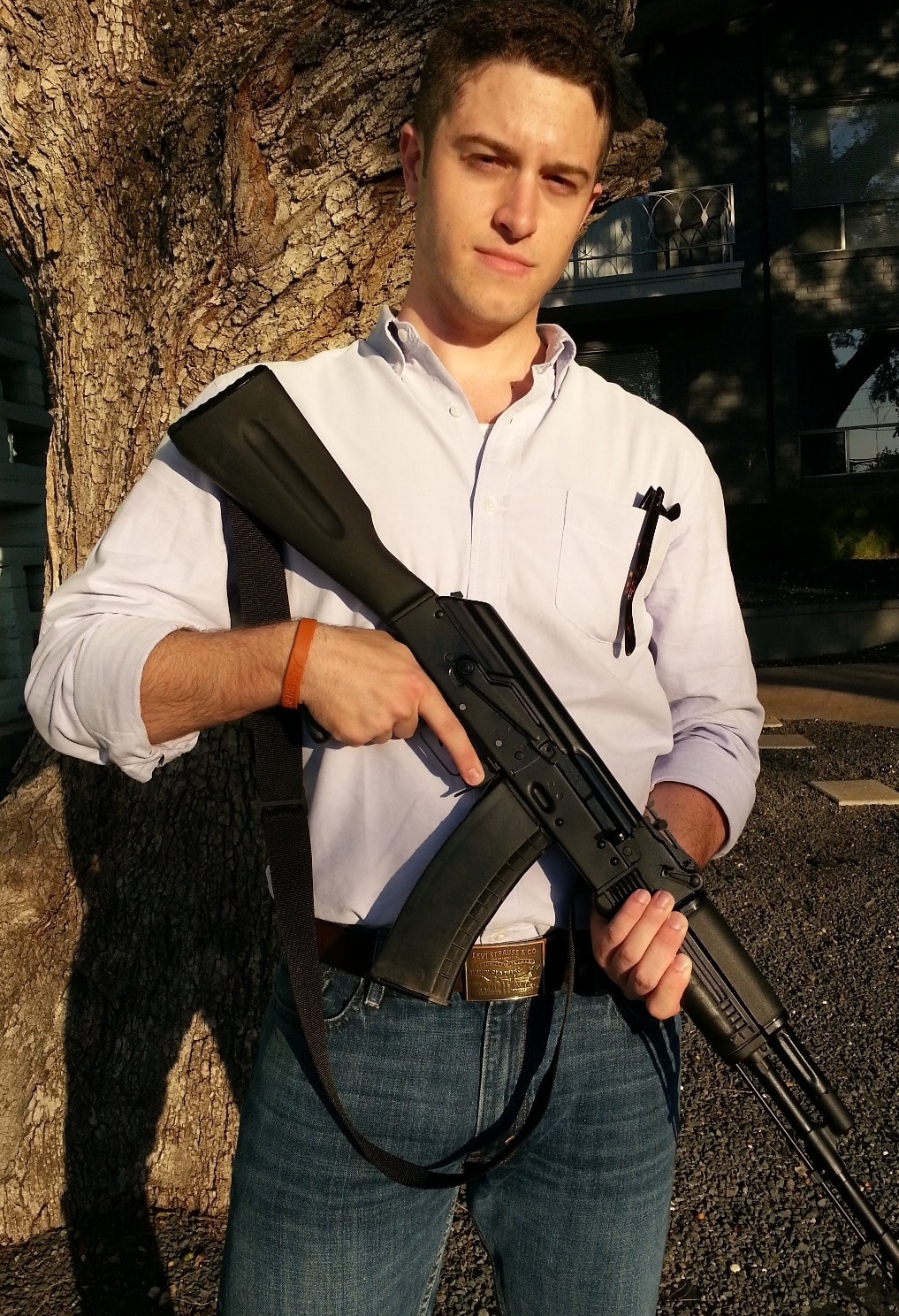 While there are different methods used in 3D printing, the RepRap uses “Fused Deposition Modeling” (FDM), the same technology developed and used by Stratasys, since the ’80s. It works by injecting melted plastic through a nozzle onto previously-deposited plastic. There are limits to the types of materials you can use for FDM printing, and most printed objects are made of ABS or polycarbonate plastic.

Making a complete firearm out of the same type of plastic used to make Lego may be possible, but obviously not something you’d really want to shoot more than once. Similar to the FP-45 Liberator pistol of World War II and flare guns today, the prototype Wiki Weapon is not meant to be fired more than absolutely necessary. Chambered for .22 Long Rifle, it very well could withstand one carefully-placed shot.

But prototyping has suffered a blow as well. News of Wilson’s project reached Stratasys, who revoked their 3D printer lease. Not only did they yank it on paper, they sent a team to Wilson’s house to seize the printer. “They came for it straight up,” said Wilson to Wired’s Danger Room. “I didn’t even have it out of the box.”

Their reason? “It is the policy of Stratasys not to knowingly allow its printers to be used for illegal purposes. Therefore, please be advised that your lease of the Stratasys uPrint SE is cancelled at this time and Stratasys is making arrangements to pick up the printer.” A copy of the letter has been posted on the Defense Distributed blog.

The only problem is, printing a gun isn’t illegal. Not by a long shot. There are restrictions, but assuming you can buy a gun, you can build one, too. No Title II firearms without a tax stamp, no machine guns, no manufacturing firearms with the intent of selling them, but you can make all you want for personal use. The only thing Wilson intends to distribute is the information. 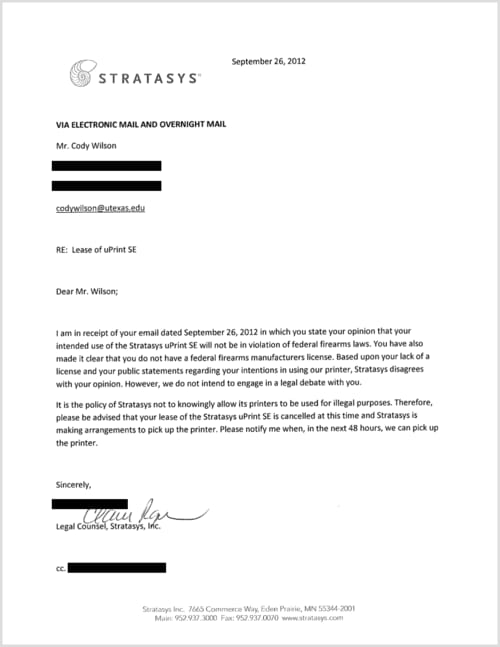 While there is some speculation that the illegal activity could be in manufacturing a firearm that could pass through a metal detector or x-ray machine without detection—a violation of the obscure Undetectable Firearms Act of 1988, which expires next year—this is also not the case, as the initial prototype calls for an electric ignition system, requiring a battery and a power supply. It’s not going to be entirely plastic.

In the same Wired article, Stratasys made a contrary statement. “Stratasys reserves the right to reject an order. Members of Defense Distributed, like any U.S. citizens, are able to follow the well-established federal and state regulations to manufacture, distribute or procure a firearm in this country.” There they are up-front. The Wiki Weapon project doesn’t break any laws, they just don’t want to be a part of it.

Wilson doesn’t plan on stopping any time soon just the same. “Of course I’m scrambling now. I’m trying to figure out, well, how can I rent an object from another party or a capital group? In the meantime, I’m doing everything else. It’s just added stress,” said Wilson.

Although there’s nothing illegal about doing things this way, the Wiki Weapon project may incorporate and pay the Special (Occupational) Tax (SOT) and become a licensed firearms manufacturer. This will increase the cost of the project and temper it’s status as a collective project that lives on the Internet. But the loss of one 3D printer is hardly enough to stop the idea of free, 3D-printable guns.

“We want everyone else to not have to do these things, so fine, we’ll do them, we’ll fool around with it, we’ll pay the thousands of dollars per year. It’s just disgusting. I hate that that’s the way it is, but that’s apparently the regulatory landscape.”

Even if Wilson fails entirely, he is right that the time is coming for 3D printers. Someone will make this, one way or another. And in time, 3D printers won’t just be limited to plastics.