Leupold is introducing the DAGR optics system as their submission to the U.S. military’s Miniature Day/Night Sight Enhanced Combat Optical Sight-Optimized (MDNS ECOS-O) request. This dual-sight optic pairs a Leupold Mark 6 3-18x44mm riflescope with an Aimpoint T1 red dot with a new mounting system. The DAGR is for snipers who need to have things covered at 1,000 yards and zero yards.

Short for Dual Aperture Gunsite Riflescope, the DAGR uses a redesigned Mark 6 scope with modified, lowered turrets to bring the Aimpoint closer to the magnified scope and still be able to see over it. This makes switching from one optic to the other more natural, particularly if you’re looking through the red dot sight off-axis and you need to peer through the scope. 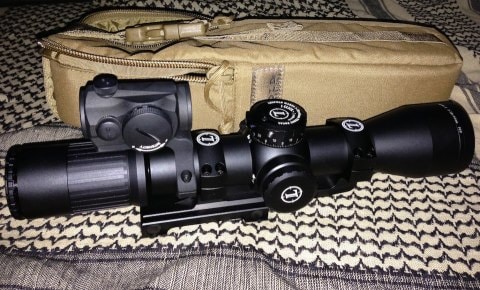 The DAGR makes short work of having to switch between long-range engagement and close-quarters shooting. And even though this is being made to meet the demands of the military, we have no doubts that this setup will be extremely popular with the commercial market.

We agree that it is fairly compact, measuring in at just 12 inches long overall. It’s not the lightest set of sights ever invented at 34 ounces, but the ability to go from 1x to 18x just by moving your head more than makes up for the weight. The Mark 6 uses a Horus TReMoR2 reticle for quickly adjusting for bullet drop and windage.

Leupold says that the low turret (M5C2) model of the Mark 6 will not replace the original (M5B2) model with the pinch- to-turn dial and quick set scale, it will be added to the Mark 6 as a separate option. The DAGR will be available for sale on the commercial market starting in 2013.

This isn’t Leupold’s first dual-optic sight system. They also make the HAMR, the High Accuracy Multi-range Riflescope. It is a mid-range scope system that combines a fixed 4x scope with a low-profile DeltaPoint red dot. While nowhere near as powerful as the DAGR in terms of magnification, the HAMR is even more compact and weighs less than half at just under 15 ounces.

This is a premium set of optics, and even though Leupold hasn’t announced the price yet, we expect it to retail for upwards of $3,000. It will come with a Berry-compliant carrying case, in addition to the scopes and the mounts. If you’re on a budget you may find the HAMR more to your liking as it runs about $1,500.