Study Finds Americans are 'Too Fat to Fight' in the U.S. Military

Americans are overweight. That statement has been something of a punchline in recent years, especially from comedians and foreigners who want to take an easy jab at the States. It’s true, though – our nation could stand to lose a few pounds.

An absolutely enormous list of retired generals from the group Mission: Readiness are arguing that America is too fat to fight. You can read all the damning evidence here.

The report estimates that three in four Americans between the ages of 17 to 24 will be unfit to serve in the U.S. military because of reasons related to obesity. The report stated, “No other major country’s military forces face the challenges of weight gain confronting America’s armed forces.”

Their strategy to fight all of these excess calories is to nip the behavior in the bud. Mission: Readiness hopes to cut down on the amount of junk food and sugary drinks in schools, which should theoretically lead to a healthier adult population. The group got behind the Healthy, Hunger-Free Kids Act, which requires the USDA to crack down on nutrition standards in schools. This isn’t the first time that the military has been concerned over our kids’ waist lines. Back in 1946, General Lewis Hershey was a key figure behind the National School Lunch Act, which sought to improve nutrition standards in public schools.

“We’re not picking on schools,” said retired Lt. Gen. Norman Seip. “The schools are part of the solution. We like to think that this obesity problem… is one that’s going to require all of America to tackle.” It appears that obesity is starting at a young age. Obesity rates among adults have doubled over the past 30 years, but they’ve tripled among children.

All of those extra pounds are adding up — both physically and financially. The problem isn’t just with recruits. Obesity is responsible for a 70 percent increase in the number of failed military physical exams, but the issue doesn’t stop there. Each year, the military discharges about 1,200 new enlistees due to weight issues. Those recruits need to be replaced, which means that all of those tax dollars the military spent on the discharged recruits — about $50,000 per person or about $60m per year — went down the drain.

Research indicates that 80 percent of children who were obese between the ages of 10 to 15 remain obese when they’re adults. Healthy eating habits (and unhealthy habits, it seems) can stick with you for life. Mission: Readiness has been looking into the cause of the problem, which is probably a combination of unhealthy cafeteria food, junk food in vending machines, and the ease by which students can bring snack foods with them to school. 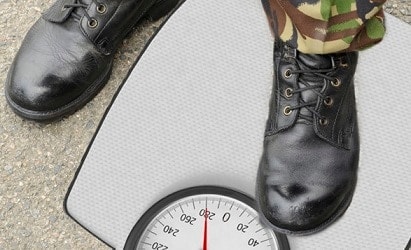 Their three-pronged strategy to address the issue is to get junk food and high-calorie foods out of school (Bloomberg would be proud), increase funding to school food programs, and support research into techniques that can help reduce obesity rates.

This is definitely an issue that will cause a bit of an uproar. Do Americans need to strap on their running shoes and spend less time munching on chips and more time exercising? Definitely. Is the best way to do it to get the government involved? Eh, that’s where you get into sticky territory. People aren’t really keen on interference from the government, but if Mission: Readiness is correct then Big Brother has a vested interest in making sure that the situation improves.

But wait! What about or drones? We’ve got a whole fleet of unmanned attack drones, so shouldn’t they help us solve the problem by doing a lot of the hard work for us? Maybe a little, but they won’t be a panacea to America’s obesity woes. Seip reminds us, “At the end of the day, the reason America is safe and sound is not because of its tanks. It’s really the men and women who volunteer and so proudly serve.” The tanks certainly help, though. And all those satellites, submarines, and nukes.

It’s a good thing that America has refined warfare down to the point where can engage the enemy through the push of a button, because in the not-so-distant future it looks like pushing buttons is the most our soldiers will be able to do.