Col. Charles Askins once said that one should not bother to practice with a “belly gun” like the snub nosed revolver or other short barreled handguns at a distance beyond ten yards. With all due respect to the good Colonel whom I have the greatest respect for, those belly guns can and should be shot at longer ranges and for good reasons.

Over the last few decades there has been a misconception among many including some of the most learned scholars of Gundom that handguns are a short range proposition only and that shooting anything past 25 yards with a defensive handgun is sheer folly. I am here to tell you that this line of thinking really hinders the aspiring pistol shot and gives the shooter a false impression about the defensive handgun in general.

Now let me explain: I think it would be very hard to justify in court any defensive shooting out to 25 yards or beyond, meaning I would not recommend shooting a non-gun toting assailant from distances greater than this with your pistol. But that doesn’t mean however you should not practice with your carry gun to distances as far as you can place the shots accurately, even if it is a mouse gun that looks like it couldn’t spit a piece of lead out past the end of your arm. 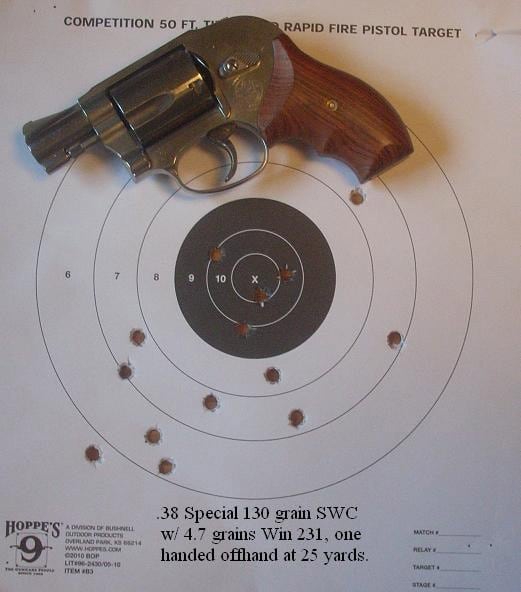 So why would you bother to practice long range shooting with such a short barreled gun?  Well as a fellow writer on Guns.com states, terrain and circumstance dictates tactics. Imagine you suddenly find yourself in a survival scenario (lost in the woods perhaps or stranded in the desert after your truck breaks down or even taking fire from a gunman 50 yards away) and the only gun you have access to is the snub nosed revolver you carry everyday.

You only have a few rounds on hand and realize that given your circumstances, you may have to make shots to defend yourself or take game farther than your “recommended” 25 yard kill zone. Now, does this sound like the time to be finding out how good of a pistolero you are or would it have been better to have practiced shooting at longer distances and know?

There are some who say that any accuracy out of one of those short-barreled guns is impossible, and those people either have not practiced enough or just don’t know what they are talking about. In the hands of a skilled shot those short-barreled guns are capable of very good accuracy out to ranges many would never believe unless they themselves witnessed the results.

As Elmer Keith always said the proof of the whiskey was in the drinking so I decided to take my own short barreled handgun, a Smith & Wesson Model 649 .38 Special and put it to the test at 25 yards which is what most people think is the barrier for handgun distance. To make it a little more interesting all of the shooting was done with one hand, off handed. This gun has a barrel length of just less than two inches and fixed sights that really make shooting a ways out tricky at best, but it can be done and was. While the group might not have been tight, all the hits were within what would be the center of a silhouette style target and a couple would have certainly bagged some small game if need be.

While some of you might be thinking that shooting this type of gun out to distances like these is really not that big of a deal, you have to remember the nature of these very short barreled handguns. Defense gurus like Askins called these guns “belly guns” for good reason and the millions of other snub nosed revolvers like my little 649 or little subcompact pistol were specifically engineered to hide in clothing and hit a man sized target across a room.  Few people seem to realize these weapons true potential because it takes more practice than many have the patience for (a fact I suspect Col. Askins new as well).

With practice though, you can expand the range of what is supposed to be a true close range gun considerably. I am certainly not saying to go out and hunt deer with your little two inch barreled pocket rocket, but there should be no reason why you can’t hit a pie plate size target out to and beyond 25 yards. You might never need to hit anything at that distance, but isn’t it better to know that you could if you had to?