About a year ago, Ohio passed a law that allowed gun owners to legally carry concealed weapons into bars. As we all know, Ohio has since fallen into absolute anarchy with gangs of gun-toting murder squads roving the streets, drunkenly looting businesses and shooting bystanders. In fact, the whole state looks like a scene out of The Road Warrior.

Actually, wait a second. We just checked our sources, and it appears that Ohio is actually doing just fine. Who would have thought?

The Columbus Dispatch recently mentioned that a year after this new legislation, “there has been silence.” Not the eerie silence that comes before a storm, but the calm, peaceful quiet of a happy community.

Scott Heimlich, the owner of Barcelona Restaurant in Columbus and the president of the Central Ohio Restaurant Association, said, “There was a lot of hubbub about it on both sides … then almost immediately it just got quiet. In restaurants, we have not had any incidents.”

He’s singing a different tune. Heimlich had a very different opinion about guns in bars a year ago: “Alcohol and guns do not mix in any type of setting. By inviting them into a restaurant, you’re opening yourself up to issues.”

What issues? Where are the drunken shoot-outs? The Pulp Fiction-esque restaurant robberies?

The Buckeye Firearms Association, the gun rights advocacy group that backed the bill, is borderline giddy about the news. “We told them so,” writes Chad D. Baus. The group’s chairman, Jim Irvine, added that gun control groups are “wrong and we’re right, again.” 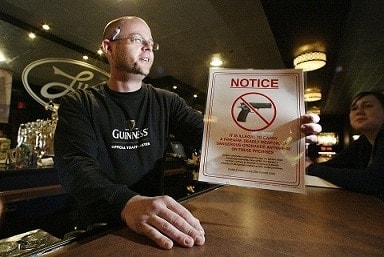 Gun control proponents, such as Toby Hoover of the Ohio Coalition Against Gun Violence, have pointed to the most notable case this past year. Chad O’Reilly, 25, was arrested after threatening to kill another bar patron with his legally registered gun.

The problem with that accusation is that O’Reilly had been drinking at the time, and the bill prohibits gun owners from drinking alcohol while they have a gun in a restaurant. The O’Reilly case is more anti-alcohol than anti-gun, if you ask us. Drinking while carrying a concealed weapon is a third-degree felony punishable by up to five years in the slammer and a $10,000 fine.

Of course, the lack of gun-related incidents might have something to do with how police document cases. Law-enforcement agencies do not specifically track violations involving guns in bars and restaurants.

Overall, though, the new law seems to be doing just fine. A few establishments have put up signs prohibiting firearms on the premises (private businesses do have the right to refuse service to people, after all), but that’s more the exception than the rule. Todd Heimann, the manager of a gun shop and indoor shooting range, added, “Every time someone posts a sign that says you are not allowed to carry in here, the only people they’re stopping are the ones who are following the law anyway. It’s like saying, ‘C’mon in, we have no way to protect ourselves.'”

It’s great that gun rights advocates can point to this bit of news. Lots of people were certain that the law would have major consequences, but so far it’s doing just fine. And nothing wins debates about the issue of gun control quite like cold, hard facts.