The U.S. Army is gearing up for a second round with the XM25 Counter Defilate Target Engagement System (CDTE). They want to put more in the hands of troops in Afghanistan for Forward Operation Assessments, or field testing. Officials are hoping to expedite development of the XM25, drop its experimental status and go into full production in 2014.

The XM25 is a programmable grenade launcher. It uses an integrated range-finding scope to mark the distance to the target. The grenades can be programmed to detonate just past the target, to effect on anyone on the other side. It’s useful for anyone behind hard cover and can also be shot through some walls, exploding once it gets inside.

“The laser rangefinder sends a pulse of light out to the target. This light pulse hits the target and is reflected back, allowing the fire-control system to calculate the distance based on the time it takes the light pulse to travel,” said Dr. Scott Fish, Army chief scientist. “Since the speed of light is known, the exact distance to the target can then be determined. Once you determine how far the distance is to the target, a computer then calculates how long it will take the round to get there.”

It has an on-board computer that sets a digital timer on each round based on the grenades’ ballistics data. Currently two types of grenades are in production, high-explosive air burst grenades and training dummies. Other grenades in planning are door-breaching and armor-piercing grenades as well as less-than-lethal solid and air burst grenades for crowd control. Each grenade type has its own ballistics so the grenade launcher must program them individually.

Some have even suggested thermobaric and flechette grenades, which would turn the XM25 in to a mini MOAB or maxi shotgun.

The laser range-finding scope is also a 2x optical sight as well as a 4x digital thermal sight and an maximum range out to 1,000 meters, although 600 is more realistic—and still ridiculously impressive. It’s semi-automatic, gas-operated and feeds from detachable 4-round magazines.

Like the standard 40mm grenades used with the M204 grenade launcher, the XM25 uses low-velocity grenades to make the recoil endurable. It uses new 25mm grenades for increased capacity. The XM25 is the current epitome of precision grenade launchers, so it makes sense to favor capacity in lieu of payload.

The XM25 has been in service for 14 months now, and this second production run will incorporate the feedback from the soldiers who have been using it.

“The kids are calling it the ‘Punisher,'” said Brig. Gen. Peter N. Fuller, head of PEO Soldier. “I don’t know what we’re going to title this product, but it seems to be game-changing. You no longer can shoot at American forces and then hide behind something. We’re going to reach out and touch you.” 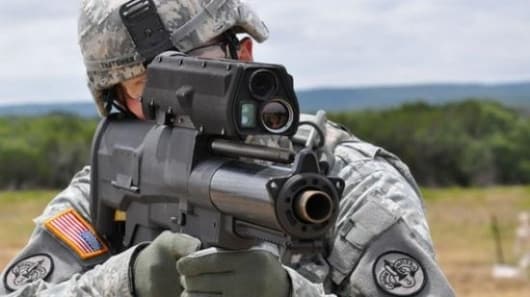 According to Col. Scott Armstrong, project manager, Soldier Weapons, “The Army has learned many valuable lessons from these deployments regarding how the weapon can be deployed and how tactics can be changed to better refine the design of the weapon. Based on feedback from Soldiers and contractor testing, we have already incorporated more than 100 improvements to the systems related to ergonomics, performance and fire control.”

Manufactured by Alliance Techsystems (ATK), Punisher Beta .02 is on-schedule for distribution in early 2013. This is in compliance with their $65.8 million contract with the military, and they will be providing 36 more of the prototype grenade launchers for testing, complimenting the 36 units currently rolling across Afghanistan. The Army plans to eventually roll out one for every infantry squad and special forces unit.

Right now, each grenade launcher costs about $25,000 and the launchers and grenades are assembled by hand, with estimates at around $1,000 each. When they go into full production the costs are expected to drop to a small fraction of that. Still, technology like this is already saving lives and making our soldiers more effective. And it’s always good to hear that the military is turning to soldiers for advice about their equipment.

The only question remains, how do we get a Punisher?