The Beretta M9 Debate: A look at the data

In the years before the Joint Service Small Arms Program, the U.S. Military used a variety of handguns in several calibers.  The standard, of course, was the M1911A1.  The adoption of the Beretta M9, in a process that drug on from 1979 to 1985, created controversy.

This is hardly surprising.  But more than 30 years later, the debate rages on.  Almost anything that focuses on the Beretta M9, or 92FS provokes the ire of those opposed to the Army’s choice of sidearm and generates rumors that a new selection process is afoot. 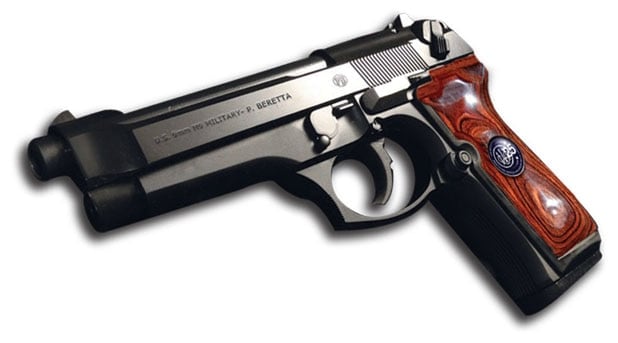 Does criticism of the M9’s reliability stand up?

The criticism of the M9 is easy enough to find.  Guns.com recently ran an article about the Army’s continuation of the M9 contract.  In our article, we acknowledged the controversy by citing an Army Times article titled “Pistols with a Shot at Replacing the M9,” from August of 2011.

The article quotes Daryl Easlick, Project Officer for Close Effects.  “Lethality,” Easlick says, “is among the M9’s several limitations.”  Logic would suggest that lethality is not the M9’s issue.  If it were a limitation, it would be attributed to the M882 (the 9mm ball round the M9 fires).   The Army Times article then paraphrases Easlick, “service life is a key issue, Easlick said, noting that the M9 is only required to fire 5,000 rounds.”

The M9 is made up of interchangeable parts, each with different performance expectations.  Easlick’s statement is reductive.  He is referring to is the frame, which is expected to last at least 5,000 rounds.  Each component of the weapon system has its own life span.  Each piece has replacement expectations based on varying round counts, and each piece is inspected regularly.

Let’s start with the earliest service life issue.  Early in the use of the M9, there were three instances of slides fracturing and coming apart.  In these instances, the rear portion of the slide would fly off, backwards, toward the shooter, causing injury.

The circumstances bear some scrutiny.  All three of these weapons were used by SEALS.  After the third reported failure, soldiers were required to maintain strict records concerning round counts and inspection schedules were revised.

The General Accounting Office took up the issue of the broken slides.  They studied all of the available information.  In a 1988 report titled “Quality and Safety Problems with the Beretta M9 Handgun,” Milton J. Socolar, Special Assistant to the Comptroller General, detailed the GAO’s findings.

With regards to the slide failure, his report notes “a fatigue crack located near the slide’s locking lug slot can cause a catastrophic break in the slide when it reaches the full aft firing position” (7). 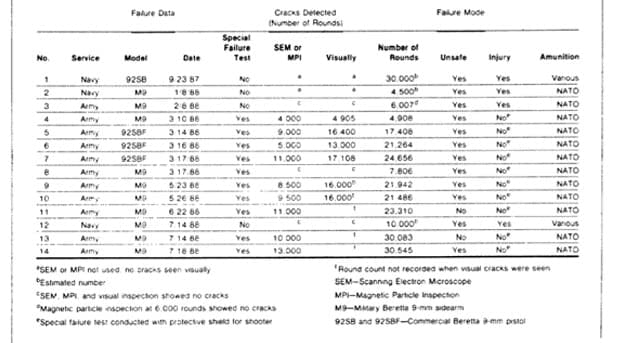 “The slide assembly,” Socolar writes, “is expected to function without cracks or breaks for at least 7,000 rounds.  As shown in the […] table, most of the weapons met this requirement” (9).  Over half of the slides cracked after firing more than 20,000 rounds.  And this was before anyone at Beretta had addressed the problem.

This was the first major operational issue with the M9.  The official GAO findings pointed to a metallurgical issue with the steel in the slides.  Beretta responded to the problem, removing tellurium from the steel (an additive that was suspected of making the steel more brittle).  They also added a safety device that acts as a restraint, should a crack occur.

Three of the slide failures were reported by Navy SEALS.  Of these three, two were using ammunition that was much hotter than the NATO specifications, ammunition that had been made specifically for sub-machine guns.  The report doesn’t dispute this; the table above identifies the ammunition as “various.”

Is there any evidence to support the GAO’s claim of metallurgical problems?  Clearly.  But the story is complicated.  Leroy Thompson, in his book The Beretta M9 Pistol, has culled much of the available details.  “By 1988,” Thompson writes, “1,821 M9 slides had to be replaced under the [revised] 3,000 round target set for the M9’s slide life.  1,066 were replaced at Crane Naval Weapons Support Center where SEAL pistols would have been served” (32).

These 1,821 slides had not cracked, but were developing cracks.  Maybe ammunition had a part in the failures.  Maybe it was tellurium.  Either way, Beretta responded and the problem stopped.

How long will the M9 really last?

Back in 1996, the Army, in an effort to find answers about service life, conducted their Continued Assurance Test of the M9 Pistol .  In this test, 129 weapons were successfully fired to the 30,000 round mark.

The Army fired more than 3 million rounds through the weapons.  Thompson, writing about the test in The Beretta M9 Pistol, notes that this was on top of the rounds these individual weapons had already fired.

The summary of the final failures, found in the CAT Report of June 1996, inspires confidence in the M9. 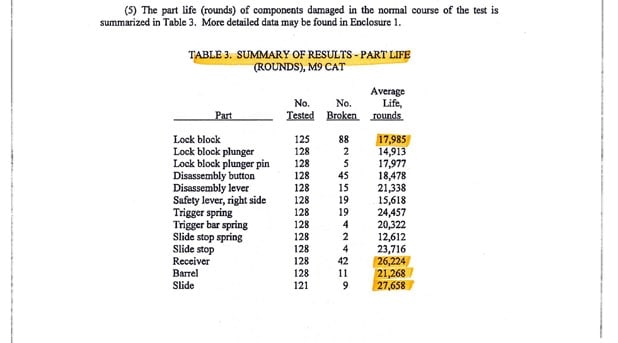 The weapon reported to have an expected service life of only 5,000 rounds seems to hold up surprisingly well.  Especially when you consider that the 5,000 round estimation is only for the receiver.  Less than a third of the receivers were damaged by 30,000 rounds.  Those that were damaged had an average lifespan of 26,224 rounds.  The slides did even better.

The debate surrounding the M9 is not always based on sound evidence.  Too often, it isn’t based on any evidence at all.

Those who are displeased with the stopping power of the 9mm round would be displeased with any of the pistols entered into the selection process.  On the opposite side, others complain about the recoil, or about the size of the M9’s grip.  This, too, was a feature of all of the tested pistols, as a double stack magazine was deemed necessary to ensure high capacity. 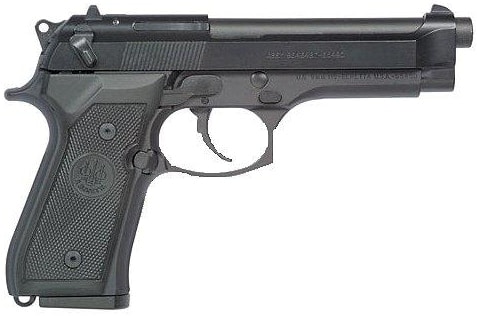 The worst M9 detractors construct arguments that use both points at the same time.  They demand a harder hitting round that produces less recoil when fired from a weapon with a smaller grip.  It should weigh less than an M9 and be a 1911.

But the argument has everything to do with the selection process itself, the stipulations of the JSSAP as far back as 1979.  These are not arguments against the M9.

The reliability issues, among all of the claims I’ve heard, are the only arguments that warrant attention (at least until new selection criteria are formally codified).  After all, if the M9 isn’t reliable, it should be replaced.  No questions asked.

But none of the available data show any unusual issues with reliability.  In fact the M9 entered service much more gracefully than other weapons, like the M16.  The Beretta M9 and 92FS may be the most extensively tested handgun ever.  As criticisms arose, Beretta and various government agencies tested the claims.  All actual problems with the M9 (those that occurred in the weapon’s design, metallurgy, or construction) have all been assessed, tested, replicated, and addressed.

There will be another selection, sooner or later.  When it comes, Beretta will be in the running.  Not with a modified 92FS, but with a gun that does whatever the new trials stipulate.  After all, they have accrued a lot of institutional knowledge.  They’ve got more than 30 years of experience navigating this particular bureaucracy.  Beretta’s design ingenuity, production capacity, and long history will make the company hard to beat.

Photo Credit:  The 25th Anniversary M9 at the top was auctioned by Beretta.