Onlinecolleges.net put together a list of 12 colleges and universities currently debating campus carry.

The list includes schools that are in the throes of the concealed carry debate for a number of different reasons, such as a change in campus policy, a state Court decision, shootings in and around campuses, etc.

Though, no matter what the reason is for the debate, it’s good to know that this issue is being discussed in earnest around the country.  In most cases, it’s a sign of progress for the pro-carry movement.

To that point, it stands to reason that the more college and university officials, faculty, staff, students, parents and taxpayers debate campus carry, the more likely they are to discover the facts, which altogether suggest that allowing law-abiding citizens to carry firearms for the purposes of self-defense does not increase crime or violence.

Here’s a quick recap of the schools on the list and the reason campus carry is a hotly discussed topic:

University of Colorado at Boulder:

Although the Colorado Supreme Court ruled that UC Board of Regents’ ban on firearms was too invasive of student privacy and safety, school officials have applied restrictions to the ruling in at least three different ways.

First, officials mandated that students living on campus with a CCW permit would be segregated from the rest of the student body and given their own housing.  Next, there are restrictions on where and how students store their firearms when they’re not carrying them.  Lastly, students attending any school function, such as a sporting event, must leave their guns at home.

Overall though, students can carry on campus, which includes general campus buildings and classrooms.

University of Colorado at Denver:

Like Boulder, students at the University of Colorado at Denver are subject to similar concealed carry restrictions.

However, given that this university is the alma mater of Aurora mass shooter James Holmes, the school has been a bit of a flash point for the debate.  In particular, advocates on both sides of the issue continue to discuss the merits of mental-health screenings and evaluations as a means to prevent mass shootings.

Also, the reporting of such information to authorities is a critical point of interest.  If a mental health professional is aware that an individual poses a threat to himself and others, how (when, to whom, etc.) do they relay the information? 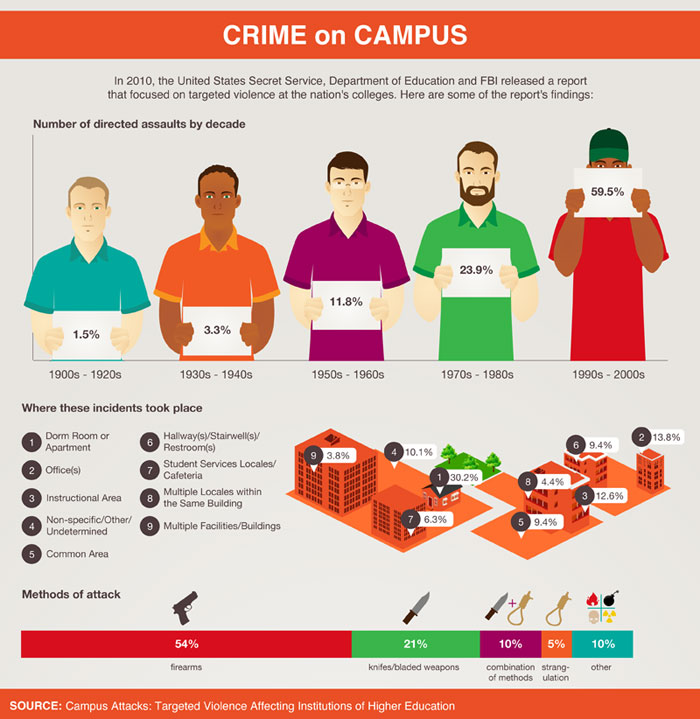 Virginia Tech made the headlines in March when a jury found the school negligent in the way it handled the 2007 massacre that left 33 people dead.

After 3 ½ hours of deliberation, jurors came to the conclusion that the delayed response by campus officials after the first shootings occurred led to the wrongful death of at least two of the students killed in what was the most deadly shooting in modern U.S. history.

The victims’ families were awarded $8 million each.

Not surprisingly, Virginia Tech is often cited by both pro-gun control advocates and concealed carry proponents as a reason to support/oppose gun control.

Effective January 2012, Old Dominion in Norfolk, Virginia, instituted an outright ban on concealed carry.  Prior to the outright ban, school officials had trouble enforcing polices that sought to keep guns off campus.

Now, as pointed out by Online Colleges.net, “only law enforcement officials may pack heat on university grounds.”

Crime in and around these two Atlanta-based schools is a problem.  As such, the current ban on campus carry is a under attack by pro-gun supporters.

It’s safe to say that gun control supporters are getting a heavy dose of “When guns are outlawed, only outlaws will have guns,” – a convincing and common sense argument that hopefully moves the needle in favor of campus carry.

University of Texas at Austin and Texas A&M University:

Along with Utah, Oregon, and Colorado, Texas is one of the few states that actually allow campus carry.

Since the decision to do so in 2011, neither school has descended into chaos (despite what some gun control advocates may have predicted).

That said, in August 2012 there was a shooting near Texas A&M that shocked the community in College Station.

The shooter was unhinged 35-year-old Thomas “Tres” Caffall (family members described him as being “crazy as hell”).

And although he had no affiliation with Texas A&M, the fact that he lived in the vicinity of the university was enough to reignite the campus carry / gun control debate.

“When it gets back to this issue of taking guns away from law abiding citizens and somehow know this will make our country safer, I don’t agree with that. I think most people in Texas don’t agree with that, and that is a state by state issue frankly that should be decided in the states and not again a rush to Washington, D.C. to centralize the decision making, and them to decide what is in the best interest for the citizens and the people of Florida and Texas,” said Perry in the aftermath of the shooting.  “That’s for the people of these states to decide.” 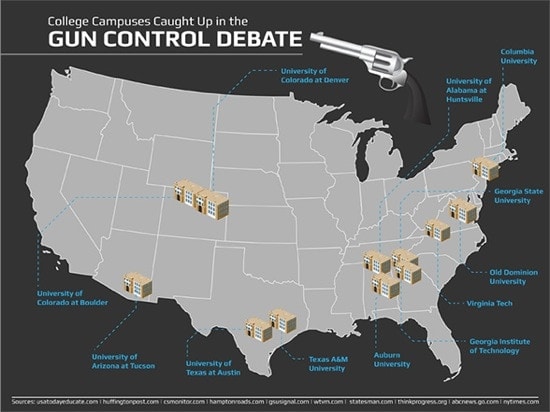 University of Arizona at Tucson:

Campus carry at colleges and universities in Arizona would probably be permitted were it not for the meddling influence of Governor Jan Brewer.

Despite having widespread support in the state legislature, a bill to remove the ban on campus carry was vetoed by Gov Brewer in May of 2011.

“While I support thoughtful expansion of where firearms should be allowed, the actual legislation that does so must be unambiguous and clear to protect the Second Amendment rights of gun owners. Senate Bill 1467 is neither,” wrote Governor Brewer in her veto letter.  She continued, stating that the bill had “too many loopholes and flaws” to sign in good faith.

However, after near and on-campus shootings (one at Auburn involving football players at an off-campus party and one at Alabama involving a disgruntled employee who shot several of her coworkers when she was denied tenure), the respective communities might be rethinking their “no guns allowed” stance.

That is, the argument that “it’s better to have and not need, then to need and not have” is certainly being discussed at these Alabama universities.

You’ll note that Ladd Everitt from the Coalition to Stop Gun Violence makes an appearance.

It’s a spirited debate that is worth watching if you have 25 minutes to spare.  The guests cover a variety of gun-related topics, but in particular, the cultural aspects and effects of gun control are given sharp focus and attention.