Last week saw a flurry of sales of gun stocks even after gun sales failed to meet their projected growth for the month of September. However, stock watchers at Benchmark Research predict that gun sales will continue to rise and they urge traders to continue to invest in the gun market.

More than a few investors kicked off a week of gun stock sales following a smaller rise in gun sales than expected. Originally estimated to see a 20 percent increase in NICS background checks, there was merely a 14.7 percent increase in checks, according to Benchmark Research’s Mark Greene. 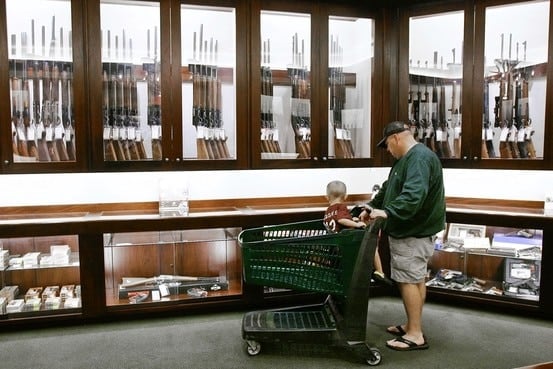 Of course, NICS checks do not translate directly to numbers of guns sold (one background check can cover several gun purchases, or even prevent a sale), but the number of NICS checks does make for a decent barometer of gun sales in general, which may have slowed for a bit but are still growing strongly.

“While checks on long guns slowed, Greene says checks for handguns rose 23 percent in September. The analyst says handgun sales have been the primary growth drive for Smith & Wesson Holding Corp. and Sturm, Ruger & Co. over the past several years, making this figure more important to their businesses.

“Sales of modern sporting rifles is also growing, Greene said, which is significant for Smith & Wesson because those rifle sales make up 75 percent of its total long gun revenue.”

The leading cause of gun sale growth in the U.S. is assumed to be election jitters, as neither of the two major party candidates inspire much confidence when it comes to expanding or even maintaining gun rights, and historically handguns and evil black rifles, or “modern sporting rifles,” have been the most restricted by legislation. There are plenty of people who are buying in response to election panic, people stocking up on ammo and supplies or jumping on gun sales because if they don’t, someone else will—and some guns and accessories really have become hard to find.

And despite this recent downwards spike in sales, firearms sellers and manufacturers are raising their sales forecasts.

“Smith & Wesson raised its full-year sales forecast last week to $530 million to $540 million, up from its previous estimates of $485 million and $505 million, citing strong consumer demand that led to a 30 percent jump in the number of firearms sold in the first quarter of 2012 compared with the year before.” 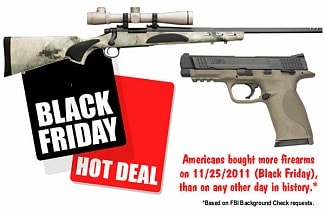 If gun sales are waning right now, it’s probably seasonal. There are extra expenses coming up with holiday preparation between Halloween and New Years. But with so little time left between now and the elections, there’s going to be a steady growth of firearm industry business.

And let’s not forget Black Friday. Gun stores, both brick and mortar and online, will no doubt be offering massive price cuts on guns, ammo and accessories for the weekend following Thanksgiving. Even after the elections are held, there is going to be another wave of gun sales.

So we agree with Benchmark Research. Now is not the time to sell off your surplus gun stocks. The gun buying bonanza that’s going on has a long stretch of road ahead of it. And honestly, if there’s any time where people are buying multiple guns at a time, it’s right now. NICS data is the only major indicator of gun sales, but it’s not accurate, especially of late. It cannot, and should not be trusted entirely.