State of emergency called in central Russia after 4,000 tons of ordnance blows up at army facility

At 12:50 p.m.—1:50 a.m. Eastern—4,000 tons of heavy ordnance detonated at a Russian army base near the town of Orenburg in three separate blasts. A mushroom cloud that rose over half a mile into the air could be seen for miles around, and the blast waves rattled and broke windows in homes, schools and a hospital “dozens of kilometers away.”

“At the local market the trading stalls folded up like playing cards. Children are being evacuated from kindergartens and schools. Everyone is being asked to go far into the steppe. The whole of Dunguz is in plumes of black smoke,” wrote Valentina Aramova on a local news website.

At least three residential buildings have been destroyed and some of the residences in the surrounding area have been evacuated. A small wildfire has broken out in the vicinity of the explosion. It is not exactly known how many people have had to leave their homes. Although an estimated 10,000 people are at risk, only 19 people have decided to move to the evacuation centers. People are unwilling to vacate their homes for fear of looters, even though the explosion collapsed roofs and felled trees.

The Russian ministry of defense states that no one has been injured and no one has gone missing, although first responders reported four casualties including one officer found during the clean-up. The local hospital later denied receiving any injured connected with the explosion. The Russian ministry of defense also originally stated that the explosions were caused by three individual shells, even though it would soon turn out to be thousands of them.

The blast was powered by 400 tons of bombs, 1,379 tons of 100mm shells and 2,300 tons of 280mm reactive shells in addition to Uragan missiles, according to the Russian military’s chief incident inspector. For now it seems like the explosion was fueled by conventional weapons. The Orenburg facility specialized in bomb disposal, although that will be up for debate in the coming weeks.

The first reports claimed that a fire at the facility’s train station loading dock set off several cars loaded with ordnance slated for destruction was the cause of the blasts, although the Russian defense ministry has officially denied that as well, stating that the facility did not have a trainload of bombs and that they don’t transport bombs by train, and that the explosives detonated spontaneously. 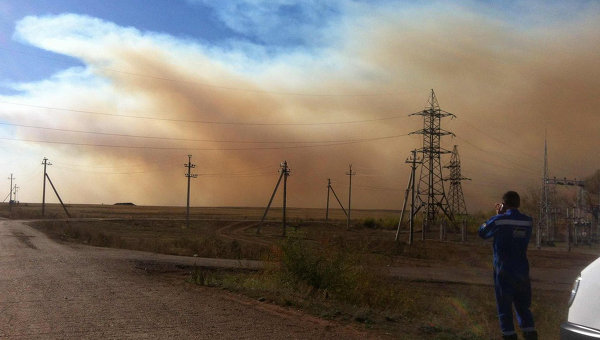 An official investigation has started and is expected to take about four weeks before their first official report. Right now no one is claiming that this is anything other than a massive accident. Despite the catastrophe, or perhaps because of it, the Russian army detonated the last of the ordinance in one final, intentional blast later the same day.

Everything inside a 10 kilometer radius surrounding the explosion was declared to be in a state of emergency including parts of Orenburg and Dunguz, another nearby town, with road and rail closures.

Citing other incidents that have previously lead to soldier casualties in addition to today’s massive blasts, local government officials and legislators have asked the governor to halt bomb disposal in the area.