Normally we at Guns.com like to cheer for gun owners out there. This story is an exception.

Aaron Martin, a 24-year-old from Kansas City, Missouri, was walking home from his second job at 3:30 in the morning when he crossed paths with a would-be robber. Martin reported that two suspects drove up next to him in a car. One of the men got out, pointed a shotgun at Martin, and said, “Freeze. Give me all your stuff.”

This is looking like a bad situation – for the robber, that is. Martin may be an average working Joe, but he’s definitely not a push over. Martin served in the U.S. Air Force and two tours in Iraq. A petty thief with a gun is small potatoes compared to the dangers Martin faced overseas. Oh, and by the way — Martin’s second job? He works as a bouncer at a late-night bar. So yeah, these thieves pretty much picked one of the most threatening people in all of Kansas City to attack that night.

The police report explained, “The victim pulled his wallet out of his pocket, held it up and as the (suspect) was standing a few feet away, the victim dropped his wallet on the ground. (The suspect) bent over to pick up the victim’s wallet, still pointing the shotgun at the victim.”

Martin went straight for the shotgun. “I grabbed (the shotgun) and hit it up in the air,” he recalled. “I started wrestling with him. I got him turned around on his back in the street. I was able to pin him down and get the shotgun away from him.”

The driver got out of the vehicle and ordered Martin to let go of his buddy, but Martin didn’t comply. Evidently, that suspect wasn’t interested in seeing Martin kick any more ass that evening, because he fled from the scene. No honor among thieves, eh? 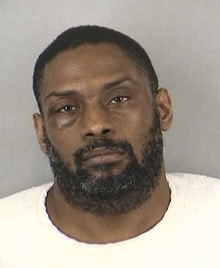 Witnesses then came to Martin’s aid. Martin told the bystanders to grab the gun so that the thief couldn’t grab it, and from there it was just a waiting game until an off-duty officer showed up.

The thief was later identified as 40-year-old Robert F. Mays of Kansas City. He was charged with attempted first-degree robbery. A judge set his bond at $100,000 cash and ordered him not to have any contact with Martin. And if that wasn’t embarrassing enough, he’s also got a shiner courtesy of USAF veteran Aaron Martin.

Moral of the story? Don’t mess with veterans. Martin said, “I was way bigger than him and I chose to fight him that night. I didn’t choose to lay down and take it like most people would.”

The reporter of the story almost scolded Martin for his bravery: “Now, some people would say you didn’t make a wise decision because your life is worth more than your wallet.” That’s true, but badasses must see the world differently. Besides, Martin never actually put himself in that much danger. The shotgun wasn’t even loaded.

This can be a good lesson for gun owners out there. We’re not trying to give you advice on how to do a robbery or anything, but this story proves that having a gun pointed at an unarmed person doesn’t make you invincible. It could have just as easily been the other way around – a thug wrestling a gun away from an armed citizen. Don’t let hubris get the better of you and allow a dangerous suspect to get too close. You could be one solid punch away from staring down the barrel of your own gun.