What's up at Calico?

When I happened across a picture of a Calico 9mm, my first thought was not flattering.  I mistook it for a toy.  It looks like a squirt gun.  The big magazine that rides on top of the Calico looks like a tank for water.  Even then, when I thought was a toy, I found it really strange.

But it’s not a toy.  The Helical magazine on top of the gun holds cartridges.  Lots of them.

The Calico Light Weapon System guns have been on the market for almost 30 years.  They were a product of the early 1980s, and embraced polymer early on. Calico developed the Helical Feed System, which essentially stacks up rounds in a spring loaded spiral inside a magazine.

The Calicos are rifles and pistols that strive to redefine how assault weapons work.  The novelty, really the only selling point, is that the tubular magazines hold either 50 or 100 rounds.  They weapons are available in .22LR, 9mm and .40 S&W.  The video below is epic.

The innovations don’t end with the magazine.  As the video shows, Calico makes a true speed loader, which allows you to simply crank the rounds down into the magazine in a matter of seconds.  The Calicos dump the empty brass out the bottom.  Neither of these innovations were new, exactly, but they weren’t common.  Now we have top loading bottom ejectors like the FN P90, so the Calico guns don’t seem so unique.

Why haven’t they caught on yet?

Some of the problems are easy enough to identify.  Many of the Calicos are select fire, which means the weapons are being marketed to military and law enforcement agencies.  And those nuts are notoriously hard to crack.  The high magazine capacity has been an issue, and certainly was during the Assault Weapons Ban that made high capacity magazines illegal.

From an end user’s perspective, I would point to two issues.  The Calico requires some training.  And the weapons themselves have a lot of parts.  The magazine alone has at least eight different components.  While this isn’t always a bad thing, the calico magazine has more that can go wrong.  And it would be fun to buzz through 100 9mm rounds in a single go, but that’s not good for any weapon.

As the magazine sits on top, sights are an issue.  The rear sight is actually part of the magazine on most Calicos, especially the pistols.  The front post sits reasonably high.  And optics are difficult to mount, as they have to allow the magazine to be taken off and put back on.

And then there is the easy observable issue of looks.  This is one strange looking weapon.  I won’t call it ugly, but it surely is odd.  Though strange isn’t always bad, a gun like the Calico would require some serious marketing to overcome our first impressions.

A good film and media blitz would help.  The IMFDB has only scattered listings for what should be a readily available prop.  The most notable film appearance?  Spaceballs.  A full blown, Mel Brooks parody.  This is precisely the problem. 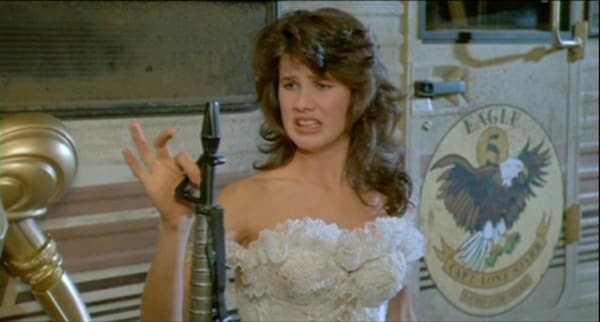 The look on Princess Vespa’s face says it all.

But let’s get back to reality.  As if the guns’ appearance wasn’t odd enough, the company’s founders chose an odd name.  Calico isn’t really a good name for a deadly weapon. Calico. Not terribly tactical.

But something is happening

It stands to reason that we could still fall in love with Calico.  Design innovation, steep learning curves, a touch of ugly, a bad name…these are not enough to make us hate something that works incredibly well.

I would argue that Calico still hasn’t found the right niche.  High capacity isn’t enough.  Magazine changes are easy enough with what we have.  And pistol caliber rifles are still not as popular as rifle caliber rifles.  So what is Calico to do?

They are working on something new.  They are testing a shotgun with a similar magazine.  How many shells with a Helical magazine hold?  25. I’m not sure that’s enough, but that will be the weapon’s selling point.

Calico’s slogan is “The Revolution Has Begun.”  Slowly, I think.  The revolution began more than 30 years ago, and we still have to be reminded that it is going on.  They are still revolutionizing.

Calico is now headquartered in Oregon.  For a while the factory was in Sparks, Nevada.  I was there at the same time, five miles away in Reno.  And I didn’t even know they were there.  This is telling.

If Calico is going to make it, and the current climate is certainly ripe for what they’re selling, the company will have to make a bigger impact on their local community and a much bigger impact on our larger community, the firearms community.