Jackass star Bam Margera has come under fire for, well, being a jackass. He recently posted a picture of himself holding a pistol to a puppy’s head to his Twitter account. According to Digital Spy, Margera posted the photograph after his seven-week-old puppy, Penny, took a dump on his bed. 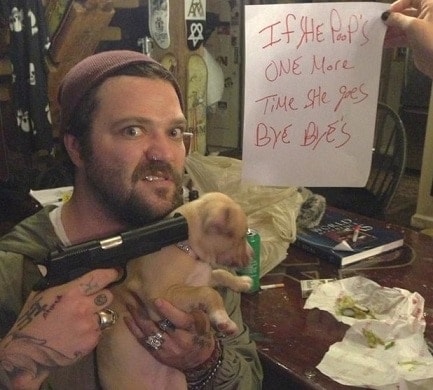 Well, the good news is that people won’t stand for cruelty against animals and rampant disregard for firearm safety. It’s all fun and games until somebody threatens a puppy, and then you’ve got a real PR problem on your hands.

Many of Margera’s 825,000 Twitter followers were outraged because of the photograph. It got so bad that Margera was forced to invite Fox News into his home in order to make a public apology. As it turns out, he wasn’t really trying to hurt the puppy, he was just trying to have some good-natured fun.

“Sorry if I offended anybody,” he said. He later added (while cuddling with and kissing Penny), “I just like to joke around. I would never, ever in a million years ever hurt a dog or a cat or any animal.” It’s also worth mentioning that the gun was a fake.

The SPCA had strong words to say about Margera’s sense of humor. SPCA spokesman Rich Britton said that depictions of animal cruelty just aren’t funny and that Margera “missed the mark on this one.”

The police aren’t laughing, either. According to Fox News, the state police have also been looking into the incident, though there is currently no word as to what charges Margera could face.

Of course, there’s another issue that none of the news agencies touched on. Pictures like this one portray guns and gun owners in a negative light. The second thought that comes to mind when you see this photo (right behind “Oh no, don’t shoot the puppy!” and right before “That guy needs to tidy up a little bit”) is “Wow, what a careless gun owner.”

It’s a shame because this portrayal of a firearm is in stark contrast to real gun owners. At least 825,000 people saw this photo, but you could go to the YouTube channel or blog of any gun rights advocate and you will never see a picture of a gun owner pointing a gun at a friend or pet – even in jest. That kind of joking around isn’t funny and it never will be.

Gun owners follow the four rules of gun safety religiously, especially the second: Never point the gun at something you are not prepared to destroy. It’s nice that Margera apologized and all, and it’s a relief that Penny wasn’t in any real danger, but it just flat-out sucks that the image of responsible gun owners had to get dragged through the mud by virtue of association.

If only those 820,000 Twitter followers could know the true gun owner’s response. You think the SPCA was peeved? If a beloved gun blogger like FateofDestinee, FPSRussia, or 22Plinkster ever tried this stunt, then the gun community would rip ‘em a new one.