Reasons for Owning a Pistol-Caliber Carbine (Like a Hi-Point)

New shooters considering home defense often overlook carbines and instead think of a pistol or shotgun as priority. Hey, early on, that was the direction I went myself, but a recent purchase makes me wonder if a pistol-caliber carbine should go on the list of possibilities.

With no specific purpose in mind I bought a Hi-Point .45 ACP semi-automatic carbine, Model 4595, because, well, I just wanted a carbine in my favorite pistol caliber, and I even liked the look (It didn’t hurt that I was buying a sturdy American-made gun for just under $300 retail either). 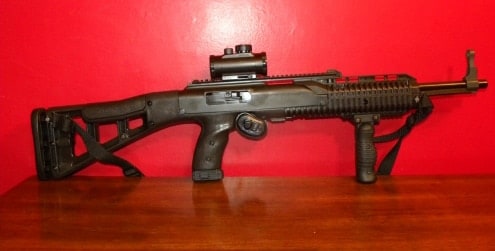 It only struck me after the fact that if I had acquired a carbine like the 4595 early on I might have been able to develop better basic home defense strategies than what I originally had in mind.

Because of the nature of a carbine, an easy to maneuver short-barreled rifle, they seem to simplify things for new shooters – especially one chambered in a pistol caliber, like say the Hi-Point Carbine 4595.

Start with easy and fun

First off, pistol-caliber carbines are easy to operate. The .45 ACP round is a good home-defense caliber, but when shot from a handgun it can be intimidating for new shooters. But in a carbine like the 4595 it becomes very easy to handle, with recoil much lighter than, say, a 20-gauge pump shotgun.

Even the most recoil-sensitive shooters in my house can handle this carbine without difficulty. Although there are pistols and shotguns available, the 4595 is thought of as the “go to” gun in the cabinet because everyone in the house, of shooting age, knows how to operate it and they trust it.

A second argument for starting with a carbine, the 4595 or another, is that it’s fun to shoot. It is regularly brought to the range and, in turn, my entire family has become familiar with it (My first, poorly informed, choice was a snub-nosed Smith & Wesson Airweight—a snappy, hand-stinging nightmare for a beginner).

In addition, the Hi-Point 4595, like the Kel Tec Sub-2000 or the Ruger 10/22, is designed in a way that allows shooters to modify and accessorize it. It has integral Picatinny rails above the stamped-metal receiver and below the heavy-polymer front stock, and also below the last four inches of its mostly shrouded 17.5-inch barrel. Needless to say I’m constantly swapping gear on and off of it.

Since it’s the G.I. Joe in my vertical toy box, I found that it serves well as a platform to experiment with inexpensive optical sights, scopes, lasers, flashlights, slings and such. It has worn many in the last few months, some owned, some borrowed. In many ways, the carbine has become a learning laboratory for me, helping me to better understand what helps me shoot and what just gets in the way.

After figuring out what works and what doesn’t I was able to settle, at least for now, on my home defense set-up. My carbine is set up for my environment and contains what I feel comfortable with. 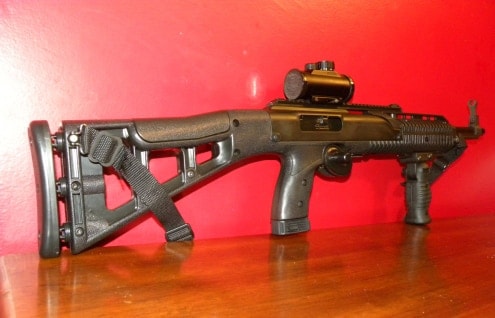 On the top rail there are standard iron peep sights, click adjustable for windage and elevation. Once sighted in, they stay sighted in, and I like having a battle-tested method of sighting that’s not battery-dependent.

On the bottom of the front-stock rail there’s, first, the folding hand grip, which also contains a multi-tool useful for any needed adjustments.  Second, a high-intensity flashlight that also strobes. The flashlight is mounted so that it sticks out slightly to the left, allowing me to operate the end-cap button without moving my hand from the grip.

On the bottom rail below the barrel is an NC Star green laser. While I do have to partially release the grip to activate the laser, my left hand never stops supporting the carbine.

Essentially I can mount exactly what I need on the gun. The concept is simple and familiar to anyone who has thought about gun retention in the tight spaces of a home environment. The shooter can illuminate a target or take aim with the laser while controlling the rear stock of the carbine by pinching it under the upper arm. At the same time, it becomes easy to keep your guard up while “shortening” the carbine to move around corners.

And yet, it’s serious enough for the job

Of course, to work as a home defense carbine the 4595 has to be reliable and reasonably accurate. I’ve found it to be so on both counts. It digests whatever it is fed, expensive hollow points or inexpensive Russian steel-cased ammo. I have yet to experience a failure to feed or fire of any kind.

Accuracy is good considering what the gun is, a carbine in .45 ACP. Shooting offhand with iron sights, I can hit a six-inch gong at 100 yards with boring regularity, despite a stiff trigger pull with a hard break. And of course, my primary concern for a home-defense carbine is that it can hit center of mass on a human-sized target at much closer than 100 yards.

For the new shooter looking for a home-defense weapon, I would suggest considering a carbine, or at least taking a look at a Hi-Point in .45 ACP. Even if you don’t end up fancying a carbine like me for home defense, it will give you an alternative perspective and perhaps improve your strategy.