The highly-anticipated, widely-sought DoubleTap, a new take on the derringer concept, has been officially delayed again. Announced around this time last year, shipping was initially expected to begin in March with the DoubleTap going into mass production. It’s clear that there have been setbacks.

The exact details of the setbacks have not been disclosed, but we do know this. Raymond Kohout, the inventor and owner of the DoubleTap and its variant, the Hedy Jane, has discontinued his relationship with his manufacturer, Heizer Defense, and will be contracting with a new manufacturing partner to make the guns. 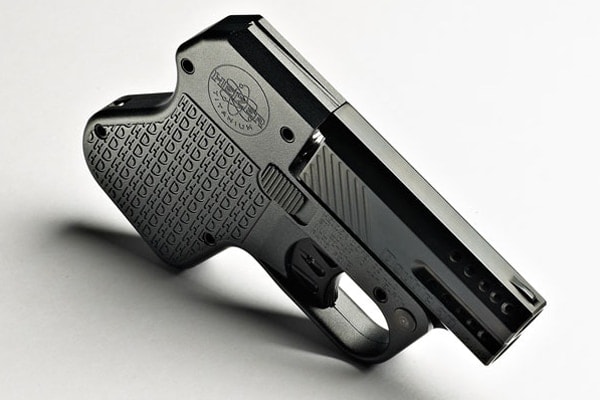 From the press release (.pdf), “Unfortunately, with the deepest regret, today I announce that we have terminated our relationship with Heizer Defense, our manufacturing partner, due to their inability to manufacture the DoubleTap pistol.  I cannot comment further on this subject at this time,under advice from legal counsel, due to pending litigation.

“It is our intention to immediately license the design to a leading firearms manufacturer or to align with another manufacturing source to produce the DoubleTap. We intend to accomplish this as quickly as possible to satisfy the huge demand for the DoubleTap pistol.  I will make a further announcement as soon as we have established a new manufacturing agreement.” 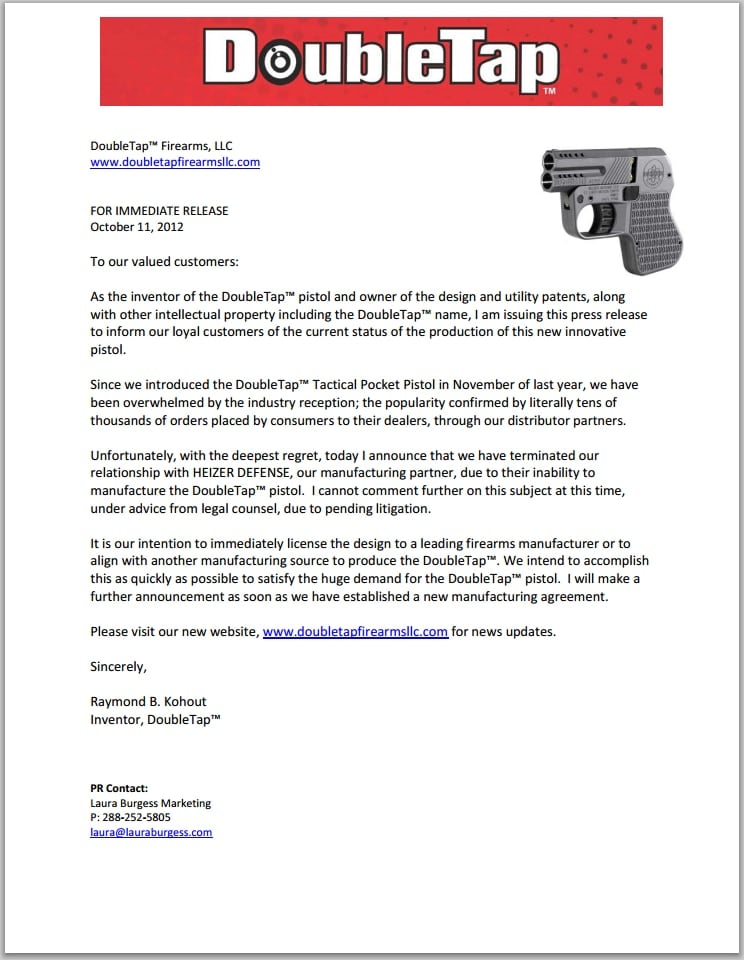 It’s clear that Heizer was not capable of making enough pistols to satisfy the rush of orders for these novel and innovative pistols. We are curious as to who this mysterious leading firearms manufacturer is.

A lot of people are going to be disappointed by this, but better to have to arrange to have them made by a new company rather than never get a DoubleTap at all. We hope to see these in production as soon as possible but would don’t expect them to become available this year. Our biggest worry is that when it comes back, it will cost more. The DoubleTap was already rubbing against the ceiling of what most people would be willing to spend on a two-shot pistol at $500 for the most basic model.

The DoubleTap is a double-barrel derringer pistol chambered in 9mm or .45 ACP. With titanium and aluminum as options for the grip and barrel shroud, this is one of the smallest and lightest centerfire pocket pistols ever designed, at just .665 inches thick, 5.5 inches long with its 3 inch barrels and 3.9 inches tall, weighing just 12 ounces in aluminum and 14 in titanium.

In addition to taking advantage of modern materials, the DoubleTap has little in common with other derringers aside from the twin barrels. It has an internal double-action-only trigger and a compartment in the grip for a pair of spare cartridges. Heizer and Kohout had planned on conversion kits to go from 9mm to .45, with ported or standard barrels, along with accessories like two-round speed strips and pocket holsters.

The DoubleTap will be getting a new website here where Kohout will make a future announcement pertaining to the new manufacturer and any other details, although right now there’s just a placeholder page. The original website is still up as though nothing had changed.