The Center for Political Beauty's plan to entomb Heckler & Koch

The Center for Political Beauty would like to build a concrete tomb for Heckler & Koch. Citing HK as one of the world’s largest manufacturer of “Weapons of mass destruction,” G3 and G36 assault rifles, which are said to have been used to kill more people than bombing of Hiroshima and Nagasaki and the Chernobyl disaster combined.

In the spirit of the containment efforts in Chernobyl, the Center for Political Beauty has a plan to completely encase the HK factory like it was dumping radiation into Oberndorf and contaminating the rest of the world.

They are kickstarting their plan on the crowdsourced fundraiser Kickst—Indiegogo, and by the time you read this they will likely have raised the €3,400 needed ($4,400) to enact their plan.

If four grand and change doesn’t seem like enough money to build a concrete casket around a facility that takes up several blocks of outer Oberndorf, that’s because it’s not. What the Center for Political Beauty really intends to do is rent a helicopter and drop some cement and gravel on their roof or something. Here’s their promo.

What can we say, it’s a “non-violent, non-criminal art project.” Donors to the cause will be rewarded with posters of a rendering of the factory entombed, DVDs of them dumping dirt on H&K and books about the German arms trade.

While they are ultimately attacking all gun sales, their singling out of Heckler & Koch touches a nerve. It says something that they didn’t pick Walther, Rhinemetall, Diehl or any others off a respectable list of German arms manufacturers, or any American or British manufacturers working in Germany. They singled out H&K. 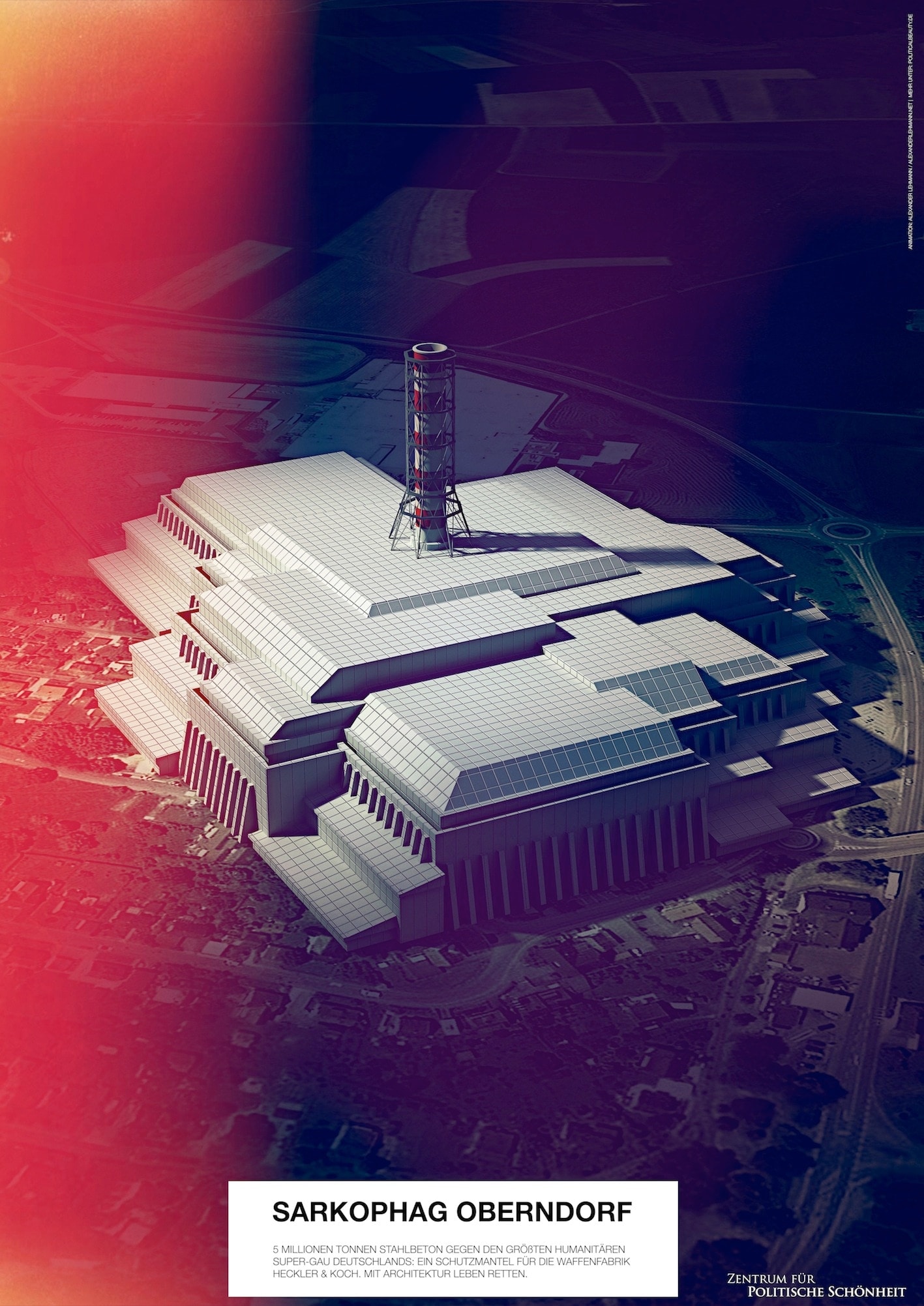 Just like the police have. Heckler & Koch is a company that’s been caught up in controversy more than a few times, for who they sell guns to (as well as who they don’t). They have been raided and investigated multiple times on the suspicion bribing government officials in Mexico to lock in sales, new G36 rifles were found in Libya, used by Gaddafi’s soldiers and they have openly traded with other questionable regimes.

It’s not just in Germany, either. There’s an organization in England that wants to shut down the U.K. branch of the firm called, simply enough, Shut Down H&K.

And they’ve been slammed here in the U.S. for not selling more of their arms on the commercial market. Not too long ago was the MP7/RECOIL kerfuffle which highlighted the company’s marginal interest in selling semi-automatic versions of the submachine guns and assault rifles to the general public, although we doubt the Center for Political Beauty cares much about this specific issue.

So yeah, Heckler & Koch doesn’t have a spotless record. But as far as plans go, this one is pretty weak and it’s clear that the majority of their fundraiser is going to go towards financing the manufacture of the thank-yous for investors. We even have to wonder if it’s legal to drop crud on a factory, even for an art project, and if the law will get involved.

And the idea of bombing a gun manufacturer…