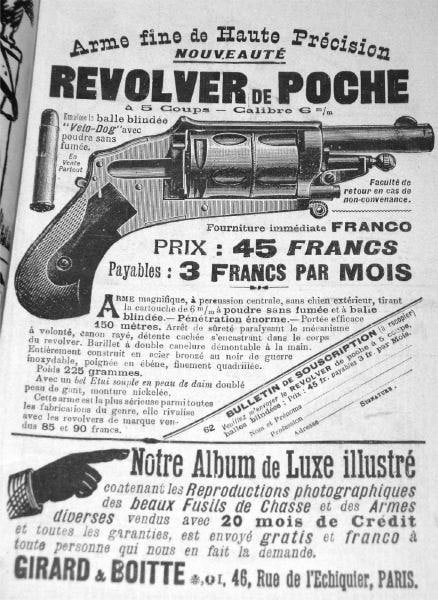 The 19th century was one of industrial revolution and wonder. It was the age of steam engines, the first practical lighter-than-air balloons, machine guns, repeating rifles, landmines, and armored warships but one of the most popular inventions of the age was the human powered bicycle. First mass-produced by the Michaux firm in France, they marketed their two-wheeled wooden and metal contraption as a velocipede, after the Latin for “fast foot.” For the rest of the century the name stuck, especially in Europe, only replaced by bicycle in later generations.

Thing was, the “modern” world wasn’t very friendly towards these early cyclists and their velocipedes. Cobblestone streets gave such a hard ride that early bicycles were nicknamed boneshakers. These vehicles scared horses, children, and dogs. The latter proved especially dangerous to these 19th century Lance Armstrongs and led to one of the strangest arms races in human memory.

The Galand arms firm was akin to the Colt revolver works in the 19th century, except that it was in Paris. The owner, manager, and primary engineer, Charles-François Galand, designed several innovative and popular revolvers for military and civilian defense purposes. In 1893, Charles designed an 8mm hammerless pocket revolver he marketed as the Tue Tue. Then an even smaller design, the Le Novo revolver soon appeared. While both the Tue Tue and the LeNovo were popular, concealable weapons, they were still too large for comfortable carry by a young man on a velocipede. By 1895 an even smaller Galand revolver was born, specifically to counter the four-legged threat to cyclists, which was named the Velo Dog.

Design of the Velo Dog

Bicycles could not be bothered to carry a large firearm for self-defense and to keep revolver as small as possible, Galand designed it to have a folding trigger and no trigger guard, thus keeping the profile of the gun slim and snag-less. Likewise, the hammer was hidden inside the frame and completely shrouded. The revolver was fixed framed and the cylinder was loaded and unloaded via a rear flip-down gate. It was one of the smallest revolvers ever placed into production, at just over 5-inch long with a 1.5-inch barrel. For comparison today’s NAA mini-revolvers are 4-inches overall with a 1.12-inch barrel.

With the average dog somewhere about 30-40 pounds, the cartridge for the small pistol did not have to be huge. Galand designed a centerfire round about the length of a .38 Special but with a 45-grain .22-caliber bullet and a light, often black powder, charge. The result was the tiny 5.5mm Velo Dog round. 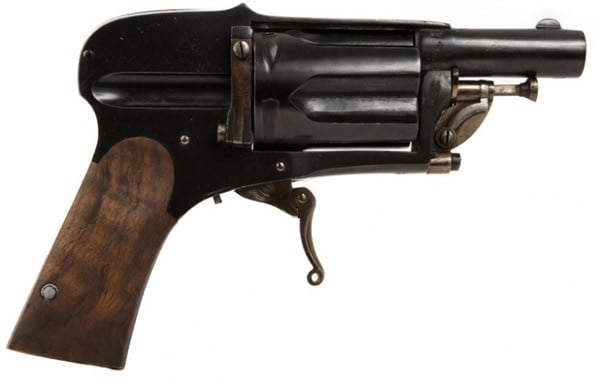 Producing just 650fps, it was not even as powerful as today’s basic 22LR. For those with soft hearts, there were also loads that replaced the lead bullet with wax, olive wood, or cork.  The 5.5mm Velo Dog later formed the basis of the .221 Askins, and .22 Hornet, but that’s another article. Galand stoked his revolver with six of these cartridges.

These bite-sized snoopy snipers, often called “Revolver de Poche” in French speaking countries, are one of the best deals in the 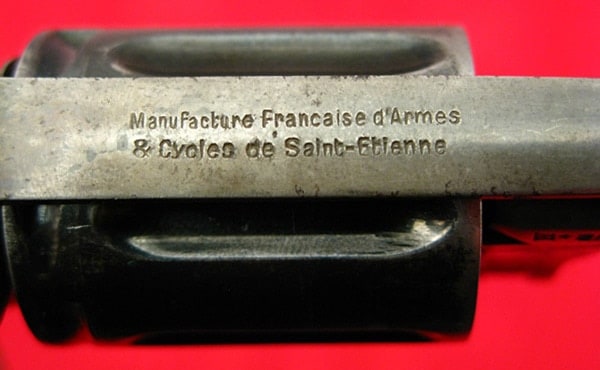 collectable gun market today. Long derided as a footnote in firearms development, countless examples have been lost, destroyed or simply scrapped, leaving those that remain highly collectable. Some are very ornate and include beautiful hard or soft wood grips and engravings.

The Galand company produced their Velo Dog style revolvers from 1894-1940 in their proprietary 5mm chambering.  They were an instant hit with the public and by the 1920s near clones were being made by a dozen firms in almost every Western European country. To get around the Galand’s unique cartridges some clones were made in .22 rimfire and .25 ACP, but of course, the rule of thumb in collecting Velo Dogs is that if it’s not chambered for the pooch, it’s not a Dog. The round was in current manufacture as late as the 1990s by Fiocchi and others and can be found for display purposes if not for firing. 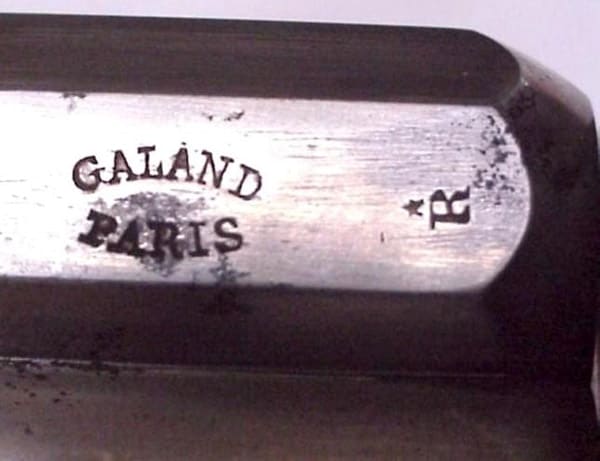 The French version of Sears, Manufrance, sold their Dog-chambered models via mail order until the late 1930s for 45 francs (payable in 3 francs a month via layaway.) The Manufrance models, marked “Manufacture Francaise D’Armes & Cycles de St-Etienne” are by far the most common and tend to go for about $200 in complete condition. Most of the other brand of clones are unmarked save for the occasional serial number and go for $100 or less.

Original Galand-made revolvers, quickly identified by their long cylinders and fold down exposed trigger (although they did make a later model with a trigger guard), often go for over $300 when found. They will be prominently marked “Galand Paris” or “Galand Liege.”

I guess you can teach an old dog new tricks.