I would like to begin by acknowledging the fine work of the LAPD, and everyone in the law enforcement community.  This article is not intended to question any law enforcement officer’s training or abilities.

There is a debate brewing.  Actually, it isn’t new.  But there’s a new chapter.  The basic premise is familiar enough: only police should be allowed to carry guns, as they have specialized training.

The heated conversation started a couple of months ago when a commenter on a blog insinuated that average shooters wouldn’t be able to pass the LAPD’s semiautomatic qualification course.

Police officers do have special training.  What about the rest of us, those of us who don’t have access to police training?  How we train and how we practice varies.  But what about our skills?  Could we pass the demanding qualification courses set up by our venerated law enforcement agencies?

Two of the participants, Barron Barnett and Joe Huffman, set up a shoot and put 22 people through their improvised version of the course.  This video summarizes the results.

Barnett’s assessment of the argument is succinct and to the point.  “The idea that police are somehow superior, merely because of their qualification course, is merely a creation of anti-gunners based on feeling, not fact.”

Barnett and Huffman’s qualification simulation is different in many ways from what the LAPD has to do.   But I’m hooked.  I want to know if I can do it.

We respect our readers here at Guns.com.  With that in mind, I’m asking for some input.  Obviously we don’t have access to the LAPD range.  They use turning targets, for one. 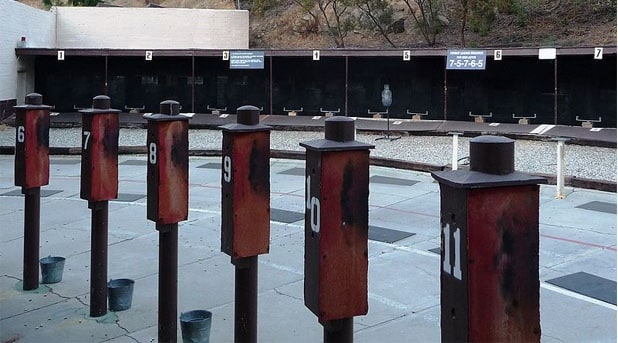 I won’t be setting this up in my backyard.  I’ll make use of an official range.  We will be using fixed targets.  In place of the turning mechanism, we’ll be using a shot timer.  These are a limitations we can’t overcome at this point in time.

We will use a variety of guns, though only two may come from the list below.

LAPD Officers are authorized to use, as their on duty primary weapon,

What is the LAPD Semi-Automatic Qualification Course?

This comes from www.handgunlaw.us, which has a nice compendium of documents.  Though this one seems to be very specific and authoritative, it is lacking the appropriate attribution needed for verification.  So I’ll ask another question…does anybody have any information that would suggest this is or isn’t accurate?

Here is the what we have:

The course consists of 30 rounds fired on two silhouette targets 15 rounds fired on each target. Combat scoring is used, e.g. 10 points for each round in the body and head, 5 points for each round in the arm(s). Only two head shots are allowed on each target, additional head shots are 5 points each. The maximum score on each target is 150 points or 300 total points. The minimum score required to qualify is 70% or 105 points on both targets. Ricochets and rounds entering the back of the target after it has turned will not be scored.

The Following Are Grounds For Disqualification:

Self Induced Malfunctions Do Not Receive Extra Time! You are responsible for the condition of your firearms! Self induced malfunctions include:

If You Induce A Malfunction, Clear It And Complete The Course Of Fire. You Will Not Be Given Extra Time!

So that’s it.  It doesn’t sound too difficult.  Even with my modest assessment of my abilities, I think I could pass this on my first attempt.  But we’ll see.

I’m going to set the course up next week.  I intend to pass.  I’m also going to recruit a couple of other shooters who have varying degrees of competency.  We’ll run it with double action pistols, single action pistols, and a revolver.

I know this isn’t going to make me a cop.  Far from it.  And I know I won’t be able to truly say I’ve qualified.  That isn’t my intention at all.  But this is something that we can test.  And that is valuable.  So many of the arguments against gun ownership are not testable hypotheses.  This one is.

Please make comments below.  I want to do this as definitively as possible.  Is there anything I should build into the course, or consider, before I run it?

Photo Credit: The LAPD Range photo is from Daniel Mayer.