In just a few short weeks, Sooner State gun owners will have a simple decision to make: open carry or concealed.

Starting Nov. 1, Oklahoma’s Open Carry law goes into effect, which means that if you have a valid handgun permit, you now have the option to openly carry your firearm in public.

With this start date drawing near, law enforcement officials around the state are getting ready for the change in carry policy, which at least one official has suggested is a bit convoluted.

“This law has been updated so many times,” Captain Dexter Nelson of the Oklahoma City Police Department told local News affiliate FOX 25, “and it’s somewhat confusing, as to who can carry a gun, and when they can carry a gun.”

Nelson’s major gripe is regarding carry reciprocity between Oklahoma and the rest of the country.  Under the new law, Oklahoma will recognize CCW permits from all fifty states, which has the potential to create problems, according to the police captain.

“Not only do we have to be concerned with the law in Oklahoma, but we will be required to contact the Department of Public Safety if someone tells us they’re from another state, and they’re carrying a firearm,” he said.

Though, according to Wes Tebo, the Director of the Oklahoma Open Carry Association, the change is really no big deal and is, of course, a boon for law-abiding citizens.

“Violence can happen any place,” Tebo told FOX 25 “and while our police officers do a good job, they can’t be everywhere at once.”

“One of the benefits to open carry, is most criminals will not attack someone who’s carrying a firearm,” he explained.

To help remove ambiguity about the new law, Tebo’s Association put together this informative Q&A:

Do I need a permit to open carry?

Yes. In Oklahoma a handgun permit issued by the OSBI is required to legally open carry a handgun.

Is there any restriction on the type of handgun I can open carry?

Almost every other state in the country allows open carry. There is no evidence to support the claim that open carry will cause more violence. The “wild west” image conveyed by those who oppose open carry is simply rhetoric. There is evidence, including an FBI study, which indicates that the presence of a firearm significantly reduces a person’s risk of becoming a victim.

Can I be charged for disorderly conduct if someone is frightened or offended by my open carry of a handgun?

Is a police officer allowed to check the serial number on my handgun to see if it is stolen or check to see if my handgun is safe or not?

No. Section 1290.8.E. Nothing in this section shall be construed to authorize a law enforcement officer to inspect any weapon properly concealed or unconcealed without probable cause that a crime has been committed.

Am I required to provide identification if I am stopped by a police officer?

You can check out more information, at the OKOCA website.

With the passage of the new law, Oklahoma became the 25th state to legalize some form of open carry. 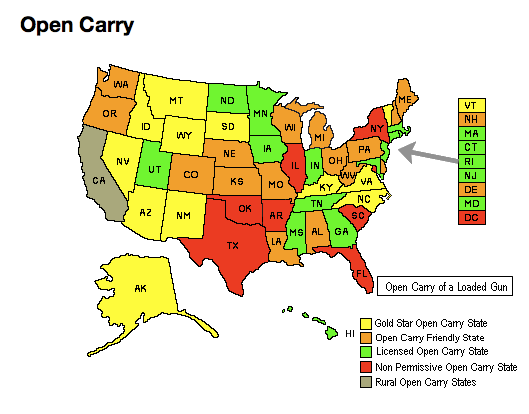 Great news!  That means we’re half way there.