County Employees in Fairfax allowed Guns at Work, but not Knives or Crossbows

Thanks to a new state law, public employees in Virginia are allowed to bring their firearms to work so long as they keep them safely locked in their vehicles.

The law, which had widespread support among Virginians, was a boon for gun owners working for city, state, and local governments.

But now, some are arguing that there may be a problem with the law.  That is, it’s too narrowly focused.

See, the law only references firearms; it does not include other tools, weapons and hunting equipment, like crossbows and knives.

As a result, officials in Fairfax County updated their employee handbooks to ban any other “weapon” aside from a firearm on county premises.

In other words, a county employee can take his shotgun to work, but not a hunting knife.

Naturally, there are many workers questioning the logic of this “weapons” restriction.  One of them, Randy Creller, the chairman of the Fairfax’s Employee Advisory Council, spoke with the Washington Examiner.

“Who deems what is and is not considered to be a weapon?” he asked. “We don’t want to leave anything up to interpretation. The county has buildings all over, and some of them are in bad areas where employees who are entering and exiting the complex at night may want to carry something to defend themselves.”

Creller added that not everyone carries a firearm for self-defense.  Some employees use devices such as stun guns and pepper spray.  He wondered if those are now illegal for employees to keep in their cars and trucks.

With respect to Creller’s concerns, Supervisor Gerald Hyland (D-Mount Vernon) said that they create a “real kink” in the county’s current regulation.”

“If an employee wants to go hunting after work, they can’t keep a crossbow in their car, but they can have a gun?” Hyland said. “There seems to be a lack of consistency here.” 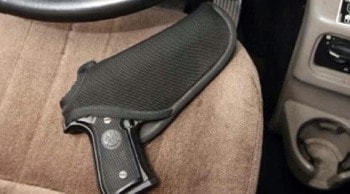 That lack of consistency is made even more pronounced by the fact that the general public can travel with weapons in their vehicles while visiting county offices and buildings, but again, employees cannot.

In response to these criticisms, county officials have parroted calls about concerns for public and employee safety as well as liability issues and legal repercussions were something to happen.

But Creller rejected those arguments.

“The county is concerned about violence in the workplace, and I get that,” Creller told the Examiner. “But you can’t prevent that [from happening], period.”

Board Chairwoman Sharon Bulova has suggested that county leaders may be willing to work something out as far as incorporating some exemptions into the employee weapons ban, but said she’s not willing to commit to a broader rule.

So, what’s the solution?

Should state lawmakers rework the state law to allow public employees to bring all legally owned weapons to work?

All of this raises another interesting question: does it follow that if guns are legal at a workplace (parking lot), all other weapons should be legal as well?