This Bullet Art is of a Higher Caliber

Have you ever looked at a box of bullets and thought to yourself, “I wonder what these bullets would look like if they were transformed into a mugshot of Ronald Reagan?” No? Well, we haven’t either. But David Palmer of Laguna Beach, California looks at a bullet and sees a blank canvas. 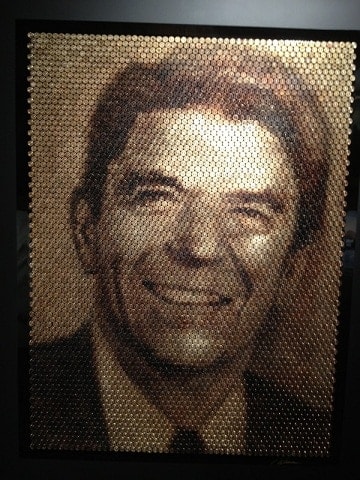 These art pieces are what Palmer calls bullet proof art. He starts with .40 cal brass and then burns the back of the brass with gun powder. The more he burns the metal, the darker and darker it becomes. This lets Palmer create a range of color from near-white polished brass to a charcoal black. Essentially, bullets act as both the canvas and the paint in these high-caliber art pieces.

According to Palmer’s website, he creates this artwork more as a means of artistic expression than a celebration of the Second Amendment. In fact, it isn’t entirely clear from Palmer’s website what his stance on gun control is. He states, “The materials I have chosen to use serve my purpose because of the blatant and emotionally charged response they evoke. These mediums already have a strong mental imagery that is attached to them. Around the world they are still used to either help build dreams or destroy the dreamers. My hope is that you will feel the agony and then see the miracles that can arise from choosing to create rather than destroy.”

If this bullet art tickles your fancy, you can order a custom gun art piece for the meager price of $10,000 to $25,000 with an estimated four to nine week delivery time. That’s a bit pricey, but nothing quite says “I love guns!” like a picture of the Duke on the backs of bullets.

Reagan, John Wayne, and other conservative icons not your thing? Palmer spans the whole political spectrum with pieces of JFK and John Lennon. Come to think of it, most of those people were shot. What do you think the artist’s message is supposed to be?

In any event, we have to admit that we like these pieces more than a lot of the other gun art work we’ve covered in the past few months. Compared to these mushy gun sculptures or these colorful AK-47s, Palmer’s bullet art does have a rather interesting take on gun art.

What do our readers think? It’s always so hard to come up with a consensus in the world of modern art. Is Palmer’s work beautiful and evocative, or is it simply kitsch with a gimmick?