Those who are familiar with Stevens voting record on key Supreme Court cases – he authored the dissent on the landmark District of Columbia v. Heller case, which established that individuals have the right to keep and bear arms for self-defense within the homes – should not be surprised by his comments, which were stridently pro-gun control.

Stevens argued that the Second Amendment is subject to limitations and restrictions vis a vis United States v. Miller (1936) and that the Heller decision, which struck down the D.C. handgun ban, did not upend the government’s power to ban certain weapons.

“[Miller] was generally understood to limiting the scope of the Second Amendment to the uses of arms that were related to military activities,” Stevens said.  “The Court did not overrule Miller [in Heller]. Instead it ‘read Miller to say only that the Second Amendment does not protect those weapons not typically possessed by law-abiding citizens for lawful purposes, such as short-barreled shotguns . . . Thus, the Second Amendment provides no obstacle to regulations permitting the ownership or the use of the sorts of the automatic weapons used in the tragic multiple killings in Virginia, Colorado, or Arizona in recent years.” 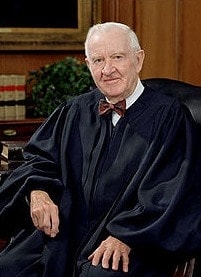 “I find it almost difficult to accept the fact that, notwithstanding the recent tragedies that I mentioned — you mentioned — how little activity there’s been in lawmaking bodies to address this issue,” Stevens told the audience. “The fact that Congress doesn’t address it, I find mind-boggling, to tell you the truth.”

“There’s a very powerful argument for saying it does not extend to disagreeing with local communities about decisions about which public places they should not be permitted to be carried [in],” the moderate Republican said, during the Questions-and-Answers segment.

However, the most striking comment Stevens made was a jab he lodged against those of us who keep firearms in the home for self-defense.

“Maybe you have some kind of constitutional right to have a cell phone with a pre-dialed 911 in the number at your bedside and that might provide you with a little better protection than a gun which you’re not used to using,” Stevens said mockingly.

Justice Stevens’ remarks should serve to remind one that our Second Amendment rights are hanging in the balance.  If you doubt this fact, you should consider what Conservative Justice Anton Scalia has said in the past about gun rights.

“Yes, there are some limitations that can be imposed,” Scalia, said in an interview with Fox News last July. “What they are will depend on what the society understood was reasonable limitation” when the Constitution was written.

“The [2nd Amendment] does not apply to arms that cannot be hand-carried.” Scalia continued.  “It’s to keep and bear.  So, it doesn’t apply to cannons. But I suppose there are handheld rocket launchers that can bring down airplanes that will have to be — it will have to be decided”.

In short, despite how explicitly clear the 2nd Amendment is, it is not a settled matter.  The door is wide open for future interpretations and re-interpretations.

In the near future, it is very possible that a liberal or pro-gun control court could significantly infringe upon our right to keep and bear arms (again, despite the fact that it clearly says, ‘shall not be infringed’).

As such, it is vitally important that we elect presidents who will appoint unambiguously pro-gun Justices.  If we do not, we may find ourselves in a world of hurt.  That is, a world without concealed carry or handguns or AR-15s, etc.

Below is a video of some of the speakers at the event.

(Transcription courtesy of the Washington Examiner)