SureFire has announced that they will no longer be manufacturing knives. This decision, while no doubt good for business, is certain to sadden fans of their blades. Their knives, designed for military and everyday use, have developed a fan base with knife enthusiasts, will soon be gone but not forgotten.

Specifically, SureFire will maintain parts and tools to maintain the knives for some time to honor their “No Hassle” warrranty, and will even continue to produce a few models to use up existing stock. “We will have enough replacement parts in stock to service knives through the next four to five years. But we will find a way to take care of our customers,” said Sean Clemence, Surefire Director of Marketing. 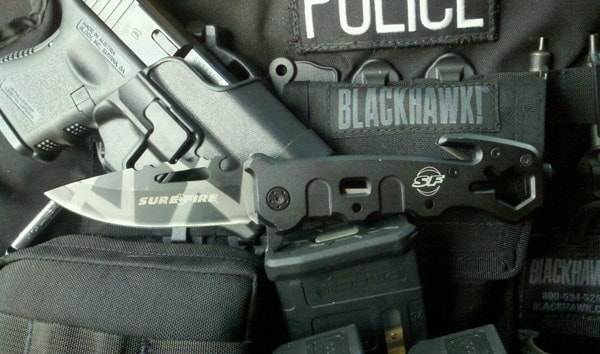 Despite the popularity of these premium knives, largely designed by Steve Ryan of Knife Art, the knives just weren’t making enough money to justify their production. Ryan will continue to work with SureFire as an engineer for other products.

“Edged weapons has never been a profitable business for us We will continue making pens,” continued Clemence, “but we are winding down the edged-weapons business and putting those resources into other projects.” The company is a major supplier of lights and silencers to the U.S. armed forces, and not too long ago landed a $23.3 million contract to produce suppressors for USSOCOM.

Also, SureFire’s commercial weapon light sales are strong and rewarding. As gun ownership continues to rise, so do gun accessory sales. With new products like their new line of 500-lumen Fury weapon lights and flashlights optimized for light and pistol techniques, it’s clear that they can’t justify a marginal knife-making division.

Hopefully SureFire will find a buyer of their designs and pass on their remaining tooling to another manufacturer. It would be a shame to see them gone forever. On the other hand, if we had to pick between gun accessories and knives, well, our position should be obvious, and we really like SureFire’s gun stuff.

GearScout has the skinny on what knives will continue to be produced, at least through to 2013. “Right now, Surefire has EW-04 Deltas, EW-12 Jekylls and even some of the semi-released Surefire Push Daggers in stock along with smaller numbers of other knives. But, all inventory will be gone by the end of March 2013. Knives that are out of stock and not coming back are the EW-05 Echo, EW-09 Edge, EW-10 Crank.”