The Bulgarian Option: the Arsenal SLR-101S

When we talk about Arsenal’s guns, we use a lot of words that aren’t often associated with AK-pattern rifles. We describe them as precision-made, with no details overlooked, and highlight their accuracy. And idioms like “vodka special” are nowhere to be found. Which is why we’re happy that Arsenal has brought back the SLR-101S.

They’re not inexpensive, by AK standards. While they’re not the most expensive, there are plenty of rare, unusual AK-pattern rifles that cost twice as much or more, if you want this rifle, expect to spend about $1,000.  Still, by going with a Bulgarian-made receiver, it’s less than similar rifles by as much as $500.

The SLR-101S is a semi-automatic rifle chambered in 7.62x39mm, built around a milled, not stamped receiver. This gives it more rigidity and has tighter tolerances than stamped receivers more commonly-used with AK-type rifles.

Of course there is some trade-off. Milled receivers weigh a little more and are more expensive to manufacture. While some milled receivers are more prone to cracking over time—the same loose tolerances and flexibility of stamped receivers offers some advantages resisting stress—Arsenal uses a hot-die hammer-forged receiver blank as opposed to a steel billet. The forging causes the crystalline structure of the steel to match the contour of the receiver, not the original steel. The end result is a receiver that has the precision of being milled with a lower hardness and high degree of ductility. In other words, they don’t crack.

They then drill and finish the receiver for assembly. Those last steps are completed by Arsenal’s American team, who assemble the rifle with both Bulgarian and American parts pursuant to gun manufacturing law. This is opposed to rifles like Saigas which are modified to comply with the law and then restored here in the U.S. 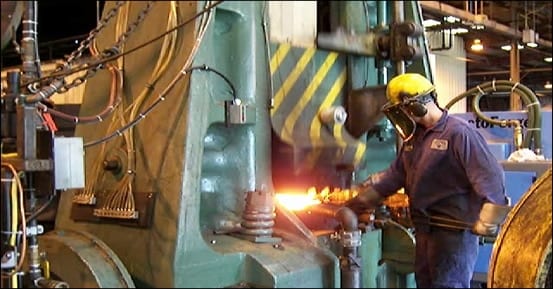 This is actually similar to the first AK-47s produced in Russia. Although the Kalashnikov had always intended to make the rifle using stamped steel receivers with welded-on rails, the Soviet armorers had not developed a process to reliably weld the rails in place for mass production.

This meant that the original AK-47 was made with milled receivers, which were more labor-intensive. It wasn’t until the late ’50s that the stamped AKM would be produced in sufficient quantities to displace the SKS for general infantry. Prior to then, the AK-47 was for special units only. Milled receivers were, and still are, the premium option.

Of course, you get more than just a heavy receiver with Arsenal. It’s a whole pile of tweaks and upgrades. It comes with all new everything, naturally, including a correct rear sight leaf, U.S. made furniture featuring a mid-length 10-inch buttstock (this is between NATO and Warsaw Pact lengths, giving it a 13.4-inch length of pull) with a trapdoor for a cleaning kit, a full-length cleaning rod, and a hard-crome-plated Bulgarian barrel made using Steyr manufacturing techniques. The barrel is finished with a 14x1mm left-hand threaded 4-port muzzle brake.

The resulting rifle is easily worth a grand. This is an heirloom-grade firearm if for any other reason than it will outlive you. If you were thinking about getting a high-end milled-receiver AK, put this one on your short list. For the rest of the info, check out the press release.

It’s just begging for one little thing. An optic. A lot of people think that’s heretical, putting an optic on an AK. Say what you will about the indomitable design, it is not without its weaknesses. Most can be argued, but the sights are just not great. Even Russia knows this, which is why their upcoming AK-12 has improved them. And it’s not as if AKs weren’t designed to accept scopes. That’s simply not the case, as this rifle has an integrated side scope mount.

We think the SLR-101, being made with tighter tolerances and premium barrel, would look even better with one of these. That is Leatherwood’s new Hi-Lux CMR riflescope with a 7.62 reticle optimized for this .30 caliber cartridge (and .300 AAC Blackout, .300 Whisper and .30-30 Winchester).

While you could use a dust cover mount like the Dog Leg Rail or the AKARS, we think this would work best with an offset Midwest Industries side mount or low-profile over-bore side mount by Molot; use the rifle the way it was designed. Put that rail to work. You don’t have to replace all the furniture; we think the Arsenal looks great without it.

A lot of people think the idea of a premium AK is just a joke, a way to separate fools and money, and would never consider dropping this kind of money on a Soviet clunker made for conscripts. This rifle couldn’t be further from that. With a little glass, or maybe just a pile of ammo, this rifle is a thing of beauty.